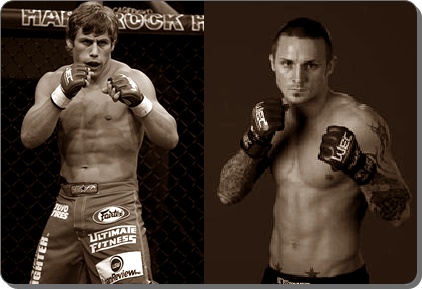 The UFC 128 co-main event should be a good one between two former WEC champions in Urijah Faber and Eddie Wineland. Faber the former featherweight champion and Wineland was the first ever bantamweight champion in the WEC.

Wineland comes into this fight on a four fight winning streak, last losing to submission ace Rani Yahya in 2009. He brings a career record of (18-6) with 9 wins via TKO/KO and 3 submission wins to his credit. Wineland has good power in his striking, but has some holes in his game when it goes to the ground as evident by the number of times he has been submitted(4).

Faber is coming off his first fight as a bantamweight, a submission win over Takeya Mizugaki back in November 2010. Faber had lost to current featherweight champion in the fight prior to that. Faber brings a career record of (24-4) with 13 wins via submission and 7 via TKO/KO.

Linesmaker has Faber as the huge betting favorite at (-500) with Wineland as the underdog at (+300).

I really do expect Faber to win this fight. Let’s be real, the UFC put Faber in this position to win. They are looking to capitalize on his fan-base and give him exposure, setting up a re-match with current UFC bantamweight champion Dominick Cruz. Remember, Faber beat Cruz about 4 years ago as he defended his WEC featherweight belt against him.

Wineland’s a good opponent, but he’s just not well-rounded enough to be a huge threat. Sure, we’ve seen Faber get knocked out in the past, and Wineland could certainly land a huge shot that puts him away. However, the odds are against that and I see Faber taking Wineland down at some point in the fight. Once there, he’ll transition to his back and sink in the rear naked choke for the win capitalizing on Wineland’s lack of of submission defense.