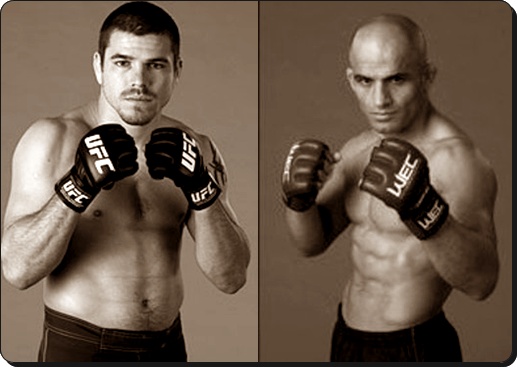 This weekend UFC 128 will feature a lightweight match-up between undefeated and former WEC lightweight Kamal Shalorus as he takes on UFC veteran Jim Miller. It’s an important fight within the UFC lightweight division. Miller hasn’t lost since he was defeated by #1 contender Gray Maynard back in 2009. Shalorus has never lost, and was one of the top lightweights in the WEC before the merger. The winner here could find themselves ‘in the mix’ of top contenders with another win or two.

Kamal Shalorus comes into this fight with a career record of (7-0) with 4 wins coming via TKO/KO and 1 submission win. Shalorus is a highly decorated wrestler that competed in Olympic qualifiers for Great Britain. He has powerful, yet unrefined striking that’s mainly a diet of huge looping punches and nasty leg kicks. He has shown the propensity to stand and trade in his WEC stint.

Miller comes into this fight on a 6 fight winning streak. We last saw him in action submitting the highly touted Charles Oliveria back in December. Miller has a career record of (19-2) with 11 wins via submission and 2 TKO/KO’s to his credit. Miller has a background in wrestling and grappling similar to his brother Dan Miller who we previewed on yesterday. Miller is a scrappy lightweight that’s very durable and can fight wherever the fight goes.

Linesmaker has Miller as the betting favorite at (-300) and Shalorus as the underdog at (+240).

I would absolutely take Shalorus with those odds if I were a betting man.

The two losses that Miller has are two fighters that are really similiar to Shalorus. Gray Maynard and Frankie Edgar are the only two fighters that have bested Miller, winning via unanimous decision. Those two fighters are currently the top two lightweights in the UFC with Edgar being the champion. These two fighters have wrestling bases and are physically imposing, with the latter attribute pertaining mainly to Maynard. The guys that have given Miller trouble are guys that can put him on his back, keep him there while defending his submission attempts. However, Shalorus hasn’t really used his wrestling ability that much in the appearances that we’ve seen him.

I think this one is really going to come down to game-planning. I think Miller probably does a better job of sticking to the game-plan, but exactly what would his game-plan be? I’m not sure that Miller can take the larger Shalorus down and keep him there? I’m not sure that Miller could have success standing, because Shalorus has a chin of granite as well. Miller could take advantage of Shalorus using kicks frequently and possibly score a couple of take-downs off of those and score. Miller may have the edge in grappling but Shalorus is versed enough there to stay out of trouble.

I think we’ll see Shalorus throwing huge power punches and kicks, landing enough to keep Miller on the defensive. He may try to implement some of his wrestling against the smaller fighter here as well. I think it’ll be a highly competitive fight, but I’ll have to go with Shalorus as he is the type of lightweight that has given Miller problems in the past. I’m say Shalorus via split decision.