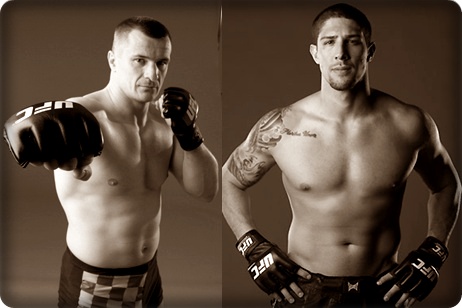 It won’t be long before UFC 128 will be taking place this weekend in Newark, New Jersey. The first preview from the card will be a heavyweight clash between former PRIDE standout Mirko Cro Cop, as he’ll be taking on TUF finalist Brendan Schaub. It’s a fight that should be fun to watch as both prefer to stand and strike, and it could be the last time we see Mirko Cro Cop in the octagon if he loses badly.

Schaub is coming into this match-up on a three fight winning streak. We last saw him in action against former #1 contender Gabriel Gonzaga back in October, were he took home the unanimous decision win. Schaub has a career record of (7-1) winning six of those fights via TKO/KO. Schaub is a former golden gloves boxing champion. The main thing that Schaub brings into this fight is his athleticism/quickness and boxing.

Mirko Cro Cop is coming into this match-up after losing to Frank Mir last September via KO in the last round. He brings an overall record of (27-8-2) with 20 wins via TKO/KO and 4 via submission. Mirko is primarily a striker, but he is versed on the ground as well and has shown that he will take fighters down if he feels he has the advantage there. Mirko isn’t the fighter he used to be, but if his straight left or left kick lands it could be a short night for anyone.

If we are honest about it, Mirko has clearly become one dimensional in his striking over the years. Well, he has always been pretty one dimensional but just had a huge quickness advantage over most heavyweights back in the day. He hates being crowded and will constantly push his opponents off him to create space. He basically throws two strikes, the straight left and the left kick to the body or head. However, he has lost a great deal of his quickness that he used to possess and fighters have been able to capitalize on that.

Schaub will definitely have the quickness advantage in this fight. He’s not going to dazzle you with 4 punch combinations or anything, but it’s varied enough that he should be able to score on Mirko. I don’t know if Mirko will look for the take-down, but if he’s able to get it to the ground it’s possible that he could exploit Schaub there. Schaub on his back isn’t in the best interest of Schaub, and Mirko’s years of training with jiu-jitsu ace Fabricio Werdum could prove beneficial even this late in the game. We saw Mirko pounce on a ‘green’ Pat Berry a couple of fights back and end it with a submission, so it’s facet that many people may neglect to mention.

It’s possible that Mirko could rock Schaub and take him out. We saw Roy Nelson hit Schaub with a one hitta quitta at the TUF Finale which just happens to be Schaub’s only KO loss. He may try to take him down, but I don’t know if Mirko is capable of that nowadays. Mirko should concentrate on throwing those vicious leg kicks to slow down the quicker Schaub. If he lands those leg kicks early, it could open up a path to the head of Schaub later in the fight.  I think Schaub just needs to keep his hands up at all times and apply pressure on Mirko, because Cro Cop has never fought effectively going backwards.

I think Schaub has the tools to take this one. I this his hands are just to active and Mirko will continue to be the passive counter-striker that he’s morphed into over the years. I’m not sure if he’ll be able to finish Mirko, but if he does it could be the lat time we see Cro Cop in the octagon. It should be a good one. Stay tuned to ProMMA Now as we’ll preview a main card fight each day this week leading up to Saturday’s PPV!