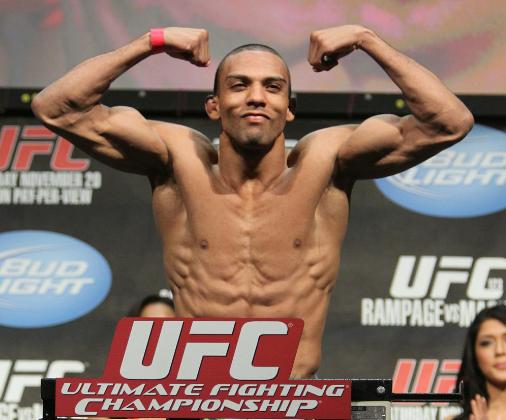 A majority of MMA fans got their first glimpse of lightweight phenom Edson Barboza Junior (7-0) at UFC 123, when the talented Muay Thai practitioner brutalized Mike Lullo with legs kicks en route to a third round TKO victory. And if you thought that was impressive, his next matchup could be a fight of the year candidate.

On March 19 at UFC 128 in Newark, N.J., Barboza will face another versatile striker, Anthony Njokuani (13-4), in a preliminary bout televised on Spike TV.

It’s an exciting opportunity, for sure, but the Nova Friburgo, Brazil native has had bigger things on his mind lately, with his hometown devastated by a disastrous mudslide. Through all of it, Barboza has managed to remain dedicated to his training regimen, using the tragedy back home as motivation.

“I had so many friends who lost their homes and some that lost loved ones,” Barboza told ProMMAnow.com. “It is difficult to be so far away and have your friends and family in a time of such distress and not be able to help them. My camp has been very focused, [though]. This tragedy has given me an added sense of urgency.”

Despite the concerns back home, Barboza expects to be more at ease in the cage, with his UFC debut out of the way. Now he knows what to expect inside the Octagon under the bright lights.

“Yes, I know I will be more comfortable,” he said. “The first fight was a challenge. I was very nervous, not so much when we were into the fight, but I did not want to make a foolish mistake and lose by being sloppy. So I did not really let my game go. This fight I am very excited about, because now I know what it will feel like to be in the UFC Cage, and I will be able to focus on the fight and let it flow.”

None of Barboza’s MMA bouts have gone the distance and Njokuani hasn’t seen the judges’ scorecards since 2006, going 7-4 in the process.

Njokuani’s highlight reel includes a variety of impressive knockouts and TKOs, so on paper, you can expect fireworks. A lot of fighters tell fans to expect a finish, but it’s pretty easy to believe Barboza when he says this fight won’t go the distance.

“His standup is very good,” Barboza said. “We have slightly different styles. It is going to be a great fight. This fight will not go all three rounds. Not a chance.”

Still, it’s not uncommon for a battle between to strikers to end up on the mat and a contest between a pair of grapplers to remain on the feet. But Barboza hasn’t been neglecting his ground game and he’ll be happy to show what he’s capable of on the ground if it comes to that.

“Anything can happen in a fight,” he said. “My ground game is pretty solid. I know that quite a few people wonder about my ground game. All I can say is watch . . . it should be very interesting as to how I win this fight.”

Barboza’s last fight ended up making the pay-per-view broadcast, but this time he knows ahead of time that he’ll be on television. Barboza is excited about the opportunity, but it doesn’t change his approach. He fights for the same reason every time, regardless of whether it’s in front of millions or in an empty gym.

“It’s great that the fight will be televised on Spike. I am glad my fans and friends and family will see it. Honestly though, I care about only the fight in the cage. I don’t fight to be famous. I fight because I really love it. I love to knock people out.”

Edson asked to thank the following: “I would like to thank all of my teammates at The Armory.  Joe, Guedes, Raffy, Luiz, Rj, Buchecha and Marlon.  My striking coach Ouali, he is the best in the world and continues to take me to levels that will perhaps one day give me a chance at a title.  I also would like to thank all of my students at The Armory in Florida for their support and friendship.”

Also, for information on how you can help with the Nova Friburgo relief effort, go to www.combatathletecharities.com. It’s a nonprofit formed by Joe Mullings of The Armory and Dan Lambert of American Top Team. The mudslides have killed and displaced thousands of people. Monetary contributions will go directly to relief efforts for life-saving supplies and much-needed aid. Other prominent MMA community members from the area include manager Alex Davis, Vagner Rocha, Marlon Moraes, and Pablo Popovitch.