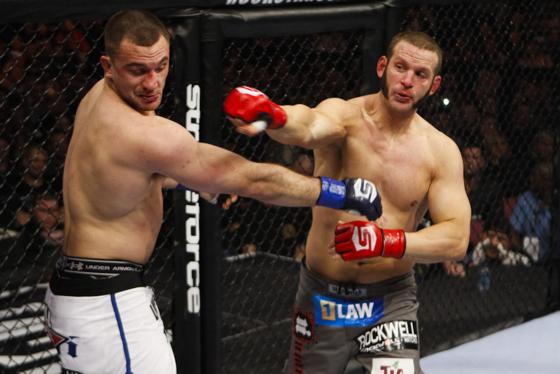 It would be an understatement to say that the MMA world was surprised this morning when news broke that Zuffa, parent company of the UFC, had purchased it’s main competitor, Strikeforce.

The last time that the landscape of MMA changed this much was nearly four years ago, when Zuffa acquired Pride Fighting Championship.

UFC President Dana White told Ariel Helwani in an interview that the two companies would remain separate for now and that it would be “business as usual.” ProMMAnow.com spoke with some Strikeforce fighters about what they think the future might hold for Strikeforce, and what this acquisition means for the MMA community as a whole.

ProMMAnow.com: When did you hear about the news of the Strikeforce purchase and what were your thoughts?

Griggs: I went for a little training this morning, got back and had a whole handful of messages and texts saying ‘what’s up?’ I think it’s exciting, but I think [everything] is kind of up in the air. Everybody is just going to be waiting to see what’s going to happen.

ProMMAnow.com: Do you think that Strikeforce and the UFC will eventually merge?

Griggs: History tells that most of the time [the UFC ends up] merging [with acquired promotions], but we’ll see what happens. I want to be cautious about what I do say being as that now Zuffa is my new boss.

ProMMAnow.com: What do you think about the idea of there possibly being less competition since there is now one less independent promotion?

Griggs: I like competition. I like the idea of having two big organizations [so] you can, as a fighter, go back and forth and try and negotiate and you don’t just have one big source that says, “This is the way that it is, take it or leave it.”

ProMMAnow.com: Do you feel like this will lead to you getting more exposure as a fighter?

Griggs: I think a lot of UFC followers are going to tune in and [follow] Strikeforce. I think it will get me more recognition. It’s so new, I just don’t know how it all is going to play out.

ProMMAnow.com: Had you heard anything before today about Zuffa possibly buying Strikeforce?

Griggs: There had been some talk I think, up maybe at the last show or something. Just talk as to how big this heavyweight tournament has been and the reaction that the fans have given to it. Just throwing that around, but as for any solid source as to that happening, none whatsoever.

Griggs: Maybe a little bit of both. I’m sure Strikeforce, this tournament, they’re having a big draw from it, so I’m sure this probably threw it over the top for Dana going ‘Ok, this is a lot of competition. There are a lot of people watching this. There is a lot of people following it. They’ve got just a ton of talent right now and I’d like to have it.’ And I’m sure they obviously offered Strikeforce something that they couldn’t turn down, so it sounds like everybody is happy in the the management division so far. [It] seems like it happened pretty quick. Now all of fighters are just going to have to wait and see what happens.

I know [Dana White] said that all of the contracts are going to be honored and he wants to keep the fighters and use them and it looks like he is wanting to continue the Strikeforce shows for now, but my guess is that nobody knows right now. I guess in one regard it’s kind of cool, you know, to be fighting for Zuffa, but at the same time it’s kind of nerve racking I guess to not have two big companies. If you run into problems with one, you can use leverage as talking to the other. [This might have] taken that away.

I feel comfortable where I sit. I’m comfortable that I won’t be dropped. I’ve had a couple of good shows. We’ll just have to see how it all plays out.

ProMMAnow.com: Hey Jorge, thanks for taking the time. Obviously the big news came out today that the UFC and Zuffa have purchased Strikeforce. What did you think when you heard about it?

Masvidal: I heard today early in the morning, and I was like, no, that’s bull****. My cousin, he’s just a fan, he told me. I was like, trust me, I would’ve been the first to know; my manager would’ve told me. And, like, 40 minutes later, my manager called me and said, yeah, that’s true.

ProMMAnow.com: Right now it’s going to be “business as usual,” so you’ll still be with Strikeforce as is. But do you think down the road this could mean more opportunities for you under the UFC/Zuffa banner?

Masvidal: Of course. At some point, if I hold the belt and I beat a couple guys then, it’d only make sense to fight the guy that has there belt. I’m sure they don’t want to do that right now … but down the line if you have a dominant champion, he’s going to face the other dominant champion.

ProMMAnow.com: Definitely. Now for you, I’m sure it was great to be able to talk with both Strikeforce and the UFC to get the best deal for your new contract. With this going down, are you worried that, for guys falling down the ladder, you won’t have as many options to find work as a fighter?

Masvidal: Oh, of course. Or even if you’re at the top of the ladder, it’s one [corporation] controlling the paycheck. It’s unique, but a lot of good things will come out of this.

ProMMAnow.com: What do you think about Zuffa buying Strikeforce?

Couture: I’m surprised by the news and excited to see how things play out and what changes are coming.

ProMMAnow.com: Did you have any idea that this was going to happen?

Couture: [I was] completely blindsided.

ProMMAnow.com: As you’ve probably heard, the UFC has bought Strikeforce. Strikeforce will still go on as its own show, but I was wondering if you have any thoughts on the news?

Beerbohm: I don’t know; I haven’t really thought about it to tell you the truth.

ProMMAnow.com: So you’re mainly focusing on your April 9 bout vs. Shinya Aoki?

ProMMAnow.com: Strikeforce is doing well, but the UFC is the top name in the sport. Do you think this could lead to some opportunities for you at some point or more exposure being affiliated with them?

Beerbohm: Yeah, I mean … like I said, I haven’t talked to Strikeforce so I don’t know what’s going on and I don’t want to say too much; everybody knows the UFC and they’re the pinnacle of MMA, so if [any good] opportunities come up, that’s great.