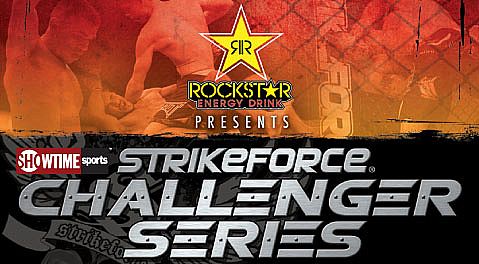 In the main event, former NCAA wrestling stud Justin “The Silverback’’ Wilcox (10-3), of San Jose, will face Rodrigo Damm (9-4) of Brazil in a lightweight bout. Other fights on SHOWTIME:  2008 Judo Olympic Games Gold Medalist Satoshi Ishii (4-1), of Japan, makes his STRIKEFORCE debut against kickboxing specialist Scott Lighty (6-1), of San Luis Obispo, Calif., in a light heavyweight (205 pounds) bout, and David “Tarzan” Douglas (6-2), of Antioch, the unidentical twin of Damian, will take on Caros “The Future” Fodor (7-2), of Kirkland, Wash., at 155 pounds.

Terry, a winner of two in a row and four of five, is coming off a 3:26, first-round TKO (punches) over Lucas Gamaza last Jan. 29 in San Jose. An explosive 170-pounder with heavy hands, excellent stamina and athleticism, the 5-foot-10, 30-year-old Terry is a product of Cung Le’s Universal Strength Headquarters in San Jose. He is 4-1 for STRIKEFORCE.

Terry, who was born in Kodiak, Alaska, started wrestling at the age of five. He was a high school state champion in Alaska and Arizona. At Pima Community College in Tucson, Ariz., he was a two-time NJCAA All American. Terry transferred to Arizona State for his junior year, but he sustained an injury that ended his collegiate career.

“I’m looking forward to a good, hard fight against Conor, who has solid experience against top guys,’’ Terry said. “This is a big step up, but these are the kinds of fights I want. I appreciate the opportunity I am getting. I’ll be ready.’’

Heun is winless in two fiercely contested, bloody, highly entertaining STRIKEFORCE fights, but the Brazilian Jiu-Jitsu purple belt and former IFL and EliteXC fighter could just as easily be 2-0.

Last June 16 in Los Angeles on SHOWTIME, the aggressive-minded 5-foot-10, 30-year-old wound up on the wrong end of a split decision against former world champion KJ Noons in a thrilling affair. On a STRIKEFORCE Challengers event on June 16, 2009, in Kent, Wash., Heun dropped a close, unanimous decision to Jorge Gurgel in a grueling, non-stop-action encounter that left both combatants bloodied and battered.

“I want to win this fight badly,’’ said Heun, a superb athlete who was ahead on one scorecard against Noons (29-28), but behind on the other two (30-27). “I was very disappointed when only one judge got it right (against Noons). I love to put on great fights. But this is one I want badly.’’

Before turning to MMA, Heun was a Division III National Qualifier wrestler at the University of Ithaca where he majored in English.  After graduating, Heun did not enter MMA immediately. Instead, he went into the corporate world and even owned his own clothing apparel line. He would later leave Colorado and move to California where he began work as a dental assistant.

Damian Douglas, who competes in a full weight class higher than “Tarzan,’’ will be making his STRIKEFORCE debut and first start anywhere since registering a 0:46, first-round submission (rear-naked choke) over Joe Schilling on Sept. 26, 2008. Damian turned pro in August 2007, nearly two-and-one-half years after his brother did.

Phillips has won both his STRIKEFORCE fights. In his last start, he scored a split decision over Fernando Bettega on Dec. 4, 2010, in St. Louis. Phillips produced a 4:27, first-round submission over Erik Lawson in his debut for the promotion on Feb. 26, 2010.

A winner of five in a row, Wilcox will be making his third consecutive start on Challengers and will be headlining for a second straight time. On Nov. 19, 2010, in Jackson, Miss., he took a unanimous decision over highly touted Vitor “Shaolin” Ribeiro in the main event on SHOWTIME.

Wilcox, a 5-foot-6, 32-year-old former bodybuilder, was born in Cincinnati, lives in Fresno and fights out of AKA (American Kickboxing Academy) in San Jose. He wrestled for Edinboro University of Pennsylvania where he befriended Josh Koscheck, who turned on his college wrestling buddy to MMA and eventually brought him to AKA.

“STRIKEFORCE has a great lightweight division,’’ Wilcox said. “There are a lot of potentially great matchups out there for me. I just take it one fight at a time, but no question I want to fight the biggest names and fight for the title.’’

Damm has previously fought for the STRIKEFORCE belt.  He replaced the injured Josh Thomson on short notice to challenge STRIKEFORCE World Lightweight Champion Gilbert Melendez on April 11, 2009, in San Jose, on SHOWTIME. The Sengoku star lost to Melendez and has split his two fights since.

Perhaps Damm’s most significant victory came when he scored a second-round TKO over American Top Team’s Jorge Masvidal on June 8, 2008, in Japan. The triumph capped off an eight-fight win streak for Damm, a Brazilian Jiu-Jitsu specialist who has produced submissions in five of his career wins.

David Douglas, a member of Cesar Gracie Jiu-Jitsu, is a 5-foot-11, 28-year-old non-stop action fighter who has won six out of his last seven fights, the last two very impressively. This will be his second consecutive fight on SHOWTIME.

In his last outing this past Feb. 18, Tarzan made like a “Ghostbuster,’’ making local fan favorite Nick “The Ghost’’ Gonzalez disappear via rear-naked choke after just 1:05 of the first round during a STRIKEFORCE Challengers show at Cedar Park, Texas.

“I wanted to showcase my Jiu-Jitsu skills,’’ said the well-conditioned, offensive-minded Douglas after outclassing the more experienced Gonzalez. “I’ll fight anybody. I feel most comfortable at 155 pounds. No one can beat me when I’m healthy and fighting regularly.’’

Two outings ago, Tarzan scored a second-round TKO (punches) over Dominic Clark in a non-televised match of a Challengers event on Oct. 22, 2010, in Fresno.

Tarzan’s most memorable win came against Mongkhon Wiwasuk, aka Malaipet, a Lumpinee Stadium Muay Thai champ in Thailand and a dangerous striker, on Sept. 26, 2008, at Santa Ynez, Calif. He rallied to triumph by third-round TKO in a brawl that featured numerous changes in momentum, exceeded all expectations and, for sheer excitement, was as good as it gets.

Fodor, a talented 5-foot-9, 27-year-old, has won two in a row, both on STRIKEFORCE Challengers, and seven of eight. In his last fight, he submitted (brabo choke) Derek “Pretzel’’ Getzel on Nov. 19, 2010, in Jackson. The previous July 23, Fodor won the only decision of his five-year career when he unanimously outpointed Thomas Diagne.

A well-rounded fighter known for his mental toughness and ability to finish, Fodor wrestled in high school but entered the Marines six days after graduation. While he was in boot camp, the terrorist attacks of 9/11 occurred and he was sent to Kuwait for the Iraq invasion.

After an extensive, successful amateur career in which he was the Genesis Fights MMA and Muay Thai champion and Revolution submission champion, Fodor turned pro. Outside the cage, Fodor, who once had his sights set on becoming a homicide detective, is a trainer at a health club and works with mentally challenged kids while remaining active in the reserves.

Ishii will be making his United States debut. He won all four of his fights in 2010 after getting outpointed in his pro debut by fellow Judoka gold medalist Hidehiko Yoshida on Dec. 31, 2009. In his last fight, Ishii won a unanimous decision over Jerome Le Banner on Dec. 31, 2010. The 5-foot-11, 24-year-old Ishii also won a silver medal at the 2006 Asian Games. He is a two-time All-Japan Judo Champion.

Lighty, a 6-foot-2, 32-year-old from San Luis Obispo, Calif., is competing for the first time since a second-round KO (punch) over Shawn Frye on Aug. 14, 2010. This will be Lighty’s third start for STRIKEFORCE and his first in a televised fight. He registered a 2:05, first-round TKO over Mike Cook on Aug. 15, 2009, but lost to Antwain Britt the following Dec. 19.