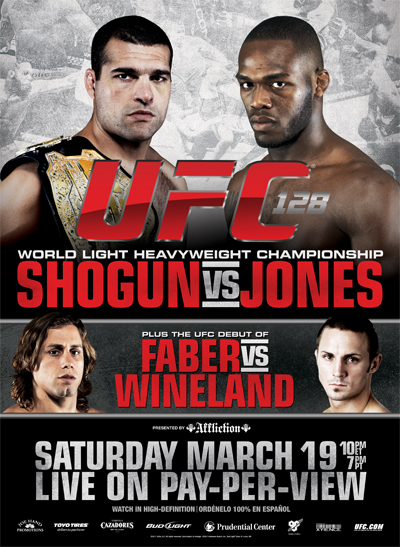 The Ultimate Fighting Championship today confirmed the remaining bouts for “UFC 128: Shogun vs. Jones” scheduled for Saturday, March 19, at the Prudential Center in Newark, N.J.

Also appearing on the Pay-Per-View card which will begin at 10 p.m. ET will be a lightweight bout between Jim Miller and Kamal Shalorus, a middleweight bout between Yoshihiro Akiyama and Nate Marquardt, and Mirko Cro Cop will take on Brendan Schaub at heavyweight.

Once again, the UFC will air a pair of Facebook fights (www.facebook.com/ufc) which will begin at 8 p.m. ET, including a welterweight tilt between Ricardo Almeida and Mike Pyle and a lightweight bout between Kurt Pellegrino and Gleison Tibau.

There are three dark matches on this card, including Joseph Benavidez vs. Ian Loveland at bantamweight, Raphael Assuncao vs. Erik Koch at featherweight, and Dan Miller vs. Nick Catone at middleweight.