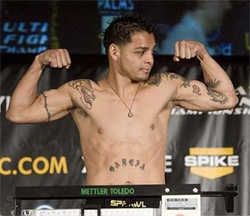 The guys talked to Garcia about his “go for broke” fighting style, where his never back down attitude comes from and the effect fighting like that could have on his longevity in the sport.

Garcia also discussed his epic battle with Roger Huerta, his fighting future and his football past. Garcia will rematch Nam Phan on March 26 at UFC Fight Night 24.

In addition to the interview with Garcia, the guys also touched on UFC 128 and the upcoming season of The Ultimate Fighter which begins airing March 30 on Spike TV.