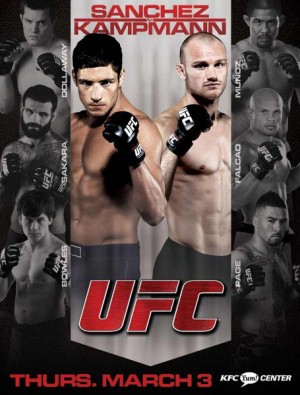 MMAJunkie with the news:

Ratings for Thursday’s action-packed “UFC on Versus 3: Sanchez vs. Kampmann” event slipped from the marks of the first two editions to a series-low audience of 681,000 average viewers, MMAjunkie.com(www.mmajunkie.com) today confirmed.

Despite an instant-classic main event between perennial welterweight contenders Diego Sanchez and Martin Kampmann, the event scored a household rating of just 0.67.

Just chill before everyone starts yelling that the sky is falling in regards to the UFC’s popularity. It was a great night of fights, but I think there are several contributing factors for the the low ratings on Versus. The main one being that fans have become accustomed to getting their UFC fix on Spike TV. Remember, the WEC only went over the one million viewer mark once during it’s three year stint on Versus. Other contributing factors are lack of promotion, and the move to a Thursday night instead of the typical Sunday night for the other two UFC on Versus shows. Diego Sanchez being the largest ‘name’ on the card(he’s not a huge draw) doesn’t exactly make fans clamour to tune in either, even though he’s one of the most exciting fighters ever in my opinion.

Now, if the ratings for TUF were to drop off drastically then I think there would be reason for concern. However, Dana White and Zuffa have found ways to keep people tuning in season after season. It’s actually pretty incredible to sustain the ratings they have attained, and the ratings for the upcoming season will surely do well with the help of Brock Lesnar. Some may say that these poor ratings on Versus will hinder the UFC from getting a huge network deal. According the White, the UFC hasn’t been approached by a network with a deal that made sense to them. So if they haven’t been approached while the UFC was doing monster numbers on Spike the past few years, odds are these ratings on Versus will have no bearing on that end. When I say monster numbers, I mean the sustained 1.5-2.0 million viewers that the UFC always seem to reach on Spike TV. Spike has a broader reach when compared to Versus, I would be willing to bet that the same Sanchez vs. Kampamnn event would have surpassed the 1 million average viewer mark with ease.

I wouldn’t reach too much into these ratings, just sit back and enjoy the FREE shows and classic fights like Sanchez vs. Kampmann.