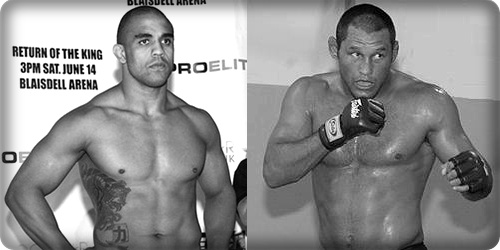 I know we’ve been talking all about the UFC Live 3 event that will take place on Versus, but there’s a pretty neat Strikeforce event taking place this weekend. The main event consists of Strikeforce light heavyweight champion Rafael “Feijao” Cavalcante defending his strap against former PRIDE champion Dan Henderson. It’s certainly an interesting main event that features two guys with knockout power.

What is there to say about Dan Henderson? He’s the former PRIDE light heavyweight and middleweight champion, and a MMA veteran for well over a decade. He comes into this fight with a career record of (26-8) with 11 wins via TKO/KO and 2 wins via submission(one was from strikes). He’s coming off a first round destruction of Renato “Babalu” Sobral in his last match-up, and it was a fight that he definitely needed to perform well. He has lost his previous fight against Jake Shields as a middleweight. Henderson is known for his knockout power, granite chin, and wrestling ability from the clinch position.

Cavalcante brings a career record of (10-2) with 9 wins via TKO/KO and 1 submission to his credit, albeit it was because of strikes. Cavalcante has fought as both a heavyweight and light heavyweight, but this fight against Henderson could be his toughest test to date. Calvalcante won the belt by finishing King Mo Lawal in the third round of their match-up in his last outing. Calvalcante is very aggressive and has big power as evident by his finishing percentage in his wins.

Linesmaker actually has Henderson as the betting favorite at (-205) and the champion as the underdog at (+165).

I would be surprised if this fight went the distance with both guys looking to end the fight with power shots. It’ll be a case of Henderson looking to land the huge right hand, or possibly using his wrestling ability to clinch and possibly put Cavalcante on his back. Cavalcante will look to keep his distance and land shots of his own. I have a hard time seeing him put Henderson down, because Henderson has a tremendous chin as I mentioned before.

However, conditioning could be a huge factor in this fight with it scheduled to be for five rounds. We saw Henderson fade as a middleweight in his bout against Shields, but he generally has good cardio as a light heavyweight. So will Henderson be able to keep his pace up for all five rounds, or will the pressure he applies to Cavalcante cause him to wilt faster? I like Henderson in this one. He has power, the ability to take Cavalcante down, and he has tons of experience over Cavalcante.