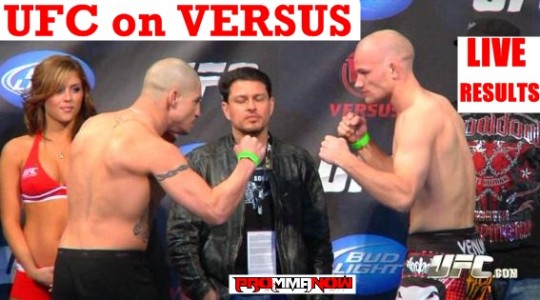 “UFC Live 3: Sanchez vs. Kampmann” takes place this evening at the KFC Yum! Yum! Center in Louisville, Ky. featuring a welterweight main event between Diego “The Dream” Sanchez and Martin “The Hitman” Kampmann.

Join us here tonight at ProMMAnow.com (www.prommanow.com) as we provide live results and play-by-play commentary during the event. In the meantime, check out our predictions on the fights and photos from the weigh-ins.

MAIN CARD (Televised on Versus)

Round 2 – Stevenson moving forward with a jab. One, two from Castillo misses. He shoots, stuffed. Left from Castillo skims Joe. Left, right from Castillo just misses. Left from Joe. Left jab scores for Castillo then a big left hook lands. Leg kick for Castillo and a left jab scores. Joe shoots, grabs a double, pressing Castillo to the cage, picks him up and slams Castillo landing in side control. Joe in half guard. Joe still working to get his leg free from half guard. Castillo gets full guard. Joe postures up with an elbow and Castillo locks his guard. Elbows from the bottom by Castillo. Castillo holding on looking for a stand up. Castillo sweeps and gets to his feet. He presses Joe to the cage, throws a knee and Joe’s hand was on the ground. It was ruled unintentional. Joe’s okay. Flying knee and a kick from Caastillo before the bell. ProMMAnow.com scores the round 10-9 for Stevenson.

Round 3 – Leg kick from Castillo, left jab from Joe. Body shot from Castillo. Castillo misses with a few shots, lands a right. Big leg kick from Castillo. Joe with a left jab, shoots but Danny gets underhooks, reverses. Joe shoots, grabs a single but Castillo gets an underhook and puts a couple, and a couple more knees to Joe’s mid section. Joe grabs Castillo’s neck from a standing position, tries to drag him to the ground but loses his grip. Castillo drops levels and Stevenson drops down for a guillotine. Castillo pops his head out and is on top now. 1:25 left in teh round. Scramble, knee to the body from Castillo, another one. Joe stands up and keeps one hand on the ground as Castillo presses him against the cage. Castillo gets the takedown. Stevenon gets to his knees and gets up. Stevenson looks for a standing kimura but Castillo lands more knees to the body and takes Joe down again with ten seconds left he mounts but Joe gets out right before the bell. ProMMAnow.com scores the round 10-9 for Castillo and the fight 29-28 for Castillo. Joe Stevenson may have just lost his last fight in the UFC. It’s very likely he will be cut after this.

NOTE: Diabate said after the fight he had been traveling too much and it hurt is cardio and that’s why he wasn’t able to finish.

Round 1 – Page swings big and misses. He attacks with more kicks and punches and Bowles fires back. Leg kick from Page and Bowles counters with a right. Flying knee from Page misses. Big leg kick for Page. Another big one. Another big one but eats a punch. Right hand by Bowles and an uppercut lands. Page barely misses with two big punches. Left jab from Bowles. Big leg kick from Page. Nice one two from Bowles, and then a nice combo to body and head. Uppercut hurts Page, catches a kick and dumps Page on his back where he assaults with several shots then locks on a guillotine choke, just like he beat him the first time they fought and Mr. Page is fast asleep. Exactly how I called it!  (Check for yourself)

Round 1 – Sakara stuffed Weidman’s shots the whole round. He didn’t do a lot of damage on the feet but definitely showed he was the superior striker. Sakara got cut somehow though Sakara gets the round easy 10-9.

Round 2 – Weidman gets a single leg early, inside Sakara’s full guard.  Weidman lands a few shots, stands and drops down with one big right and Sakara’s cut is opened up badly bleeding. Badly gushing. Weidman in side control and has Sakara in trouble. Weidman using elbows and punches, working on that cut. Sakara gets to his feet but quickly gets taken back down. He gets up again, clinched against the cage. Sakara is a bloody mess and calls in a doctor to check it out. They let it go. Weidman with a leg kick, then a one two punch combo. Big leg kick from Weidman. Sakara swings big and misses. Weidman is standing with him right now, testing out his striking. Big body combo from Sakara, again to the liver. ProMMAnow.com scores it 10-9 for Weidman.

Round 3 – Big body shots from Sakara. Knee from Weidman to the body. Weidman shoots, drives it hard and puts Sakara on his back. Weidman in side control, lands a nice elbow. Sakara lands an elbow off his back. Matt Serra in Weidman’s corner calling out instructions. Weidman controlling the action here, landing short punches. Weidman now in half guard, landing little rabbit punches, postures up with a couple bigger shots. Weidman moves to half guard and the ref stands them up. Left hand from Sakara. Weidman shoots, drives it through and puts Sakara against the cage, pulls him down flat away from the cage, has side control. Sakara backhands him from the bottom. Weidman now in half guard, not doing much. Sakara pushes him off and gets up. Weidman gets a leg and gets him back down with ten seconds left. One more left hand from Weidman at the bell. ProMMAnow.com scores the round 10-9 and the fight 29-28 for Weidman.

Round 1 – Leg kick from Dollaway, big one. Dollaway gets a takedown, Munoz grabs a leg but Dollaway stands up and lets Munoz up. Big right hand drops Dollaway and the ref stops it very quickly. Munoz followed it up with a couple shots before the ref stopped it. Yamasaki was right there looking in Dollaway’s eyes, so although it may have looked early to us, he was obviously hurt. He did get up fairly quickly but he got hit VERY hard with one big shot on the chin that snapped his head sideways and dropped him.

Round 1 – The Dream vs. The Hitman. Diego looks very intense. Kampmann touched gloves to Diego’s chest. No abs for Diego. Kampmann throws a combo and Diego covers up. Diego grabs a collar tie and some knees but Kampmann blocks. Body shot from Diego. Right hook barely misses for Diego. Right hand for Diego, he shoots, gets a single, pushes Kampmann against the cage. Kampmann is free, lands a knee to the chin. Kampmann drops Diego with a straight right. He grabs a front head lock and lands a knee, another one. Diego explodes, grabs a single, but is stuffed. They’re back up and squared off. Left hand by Kampmann. Diego is busted up. Right hand from Martin. Lands a knee to the chin of Diego. Left hand from Sanchez and he is bleeding. Right hand from Kampmann, Sanchez shoots, stuffed. Right hook from Sanchez. Body shot by Diego. Left , right from Kampmann, then another left. Diego shoots, puts him against the cage. Kampmann with a knee and Diego backs up. Sanchez is bleeding badly from his mouth which may mean his nose is broke. ProMMAnow.com scores the round 10-9 for Kampmann.

Round 3 – Diego was looking like Vitor Belfort with those punch combinations. Very exciting. That is an awesome Diego Sanchez. Left straight from Kampmann. Right hand from Sanchez. Another one. Diego shoots, grabs a single but Kampmann stuffs it, lands a knee. Kampmann breathing heavy. Right hook from Diego scores. Nice combo of punches from Diego. Diego shoots, stuffed. Kampmann kicks him in the leg.  Nice left from Diego rocks Kampmann. Diego swings, shoots, finally gets a takedown and lands in side control. That’s huge. Diego slips off his back and Kampmann is back up. They both land punches. Nice left from Diego. Right hand from Kampmann but Diego fires back with a big combo. Knee from Kampmann. Diego scores with more punches and Kampmann’s hand is hurt. More combos from Diego. Diego is bleeding pretty badly. Ten seconds to go and Diego chases him down like Wanderlei Silva. A real slug fest here. A cornerman just put a towel on Diego’s bloody face and blood squished out between his fingers through the towel… whoah. Great freakin fight guys, great fight. I give the final round to Diego and give him the fight 29-28. It seemed like he wanted it more, put on more pressure and frankly landed the harder shots. He worked at a higher pace and put on a great performance. And if he wins, he brought my picks up to 10-1 for the night. (You can see all our picks here.)

NOTE: He did it! Enormous win for Diego Sanchez!! I have no idea why this crowd is booing. Diego has a HUGE  hematoma under his eye. His face looks horrible, absolutely horrible. Some people cheer for Kampmann, thinking he won, but still a lot of people booing. Kampmann thinks he won the fight and broke his hand.