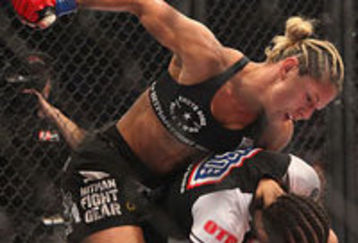 The report says that Cyborg and her husband, Evangelista “Cyborg” Santos, attended a recent WWE event in California and received the offer from the wrestling promotion’s management.

Santos has been dominant since appearing for the now-defunct EliteXC organization and transitioning to Strikeforce. Only one of her last six fights has gone the distance, a decision win over Yoko Takahasi.

Cyborg won the title from Gina Carano in dominating fashion in August 2009 and has defended it twice. However, finding a suitable challenger hasn’t been easy.

Back in September, Strikeforce CEO Scott Coker expressed his plans to get Cyborg a fight in late 2010 or early 2011, but no plans have been announced yet.

Strikeforce could have some depth added to its women’s MMA stable with Carano set to possibly return in June and the emergence of Amanda Nunes. Nunes made her in stunning fashion at Strikeforce Challengers 13, knocking out Julia Budd in 14 seconds. A separate Tatame report says that Nunes’s team and Strikeforce are negotiating setting up a fight against Carano. (UPDATE: looks like Nunes vs. Carano ain’t happening.)

ProMMAnow.com has contacted Strikeforce to see if the promotion has any comment.