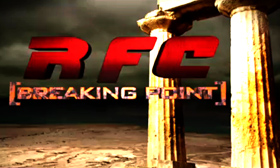 This will be a night of drama, excitement, and entertainment with 9 action packed cage fights.

The Main Event is Undefeated Patrick “Lights Out” Cenoble 5-0 record vs. UFC’s TUF veteran Paul “The Wheel” Barrow with a 4-1 record.

Both fighters have a strong MMA background.

Cenoble is trained by the fighting Bertos’ Tigers World who produce nothing but champions, Berto says “he is the hardest hitting 155lb in the world, no one in Florida can beat him.” Cenoble is fighting for a shot at the vacant light weight RFC title.

Barrow was a fighter on the UFC Spike TV show the Ultimate Fighter (TUF), trained by UFC fighter Matt Arroyo and Rob Khan from Gracie Tampa. Barrow needs this win for a shot at the RFC title and national exposure. Both of these training camps bring fighters that have pride, experience, and excitement.

This fight is rated as a top ten fight in every MMA, magazine, and radio networks in Florida.

This is Crowther’s pro MMA debut having been a former boxer, MMA promoter and 50 yr. old cancer survivor. Crowther says he “trains harder than a 25 year old fighter, looks better than majority of them, and refuses to fight someone his age.”

Crowther, who fought for his life after being diagnosed with cancer and beat the odds, now is looking to defeat the odds again, as he faces a young opponent in James Crawford. Says Crowther “I will beat Crawford as I beat cancer because this time it’s it for fun.” In his corner will be the famous former UFC fighter Dan “The Beast” Severn.

Crawford’s pro debut background includes wrestling and ground and pound. Trained by well known Chris Hickman, Crawford says he “has respect for older people but will slap grandpa around before he takes him to the ground for a submission .”
This fight is shaping up to be to be the “fight of the night.”

Other fights on the action packed card include:
Rocky Shallcross vs. Mike Rideout.
Shallcross, 170lb from Ocala. FL is a stand-up fighter with one punch knockout power.
Rideout 170lb is also a stand-up fighter who likes to go blow for blow and see who’s standing at the end.

Joe Valdez. Matchmaker states “this will be a crowd pleaser as both fighters will go punch for punch with both having tremendous knockout power.”

Shane with a record 9-7 from Georgia wants to be known in Florida and wants RFC to give him a title shot at the RFC heavy weight title.

Greeson 3-0 a MMA stand up fighter and pro boxer with a 2-0 record, in his last fight in the RFC knocked out and broke opponent’s leg with one punch. He is one of if not “The” hardest hitting heavyweights in Florida.

Josh Conner pro-debut joining two of his brother who are pro MMA fighters vs. Stephan Cummins who won “Fight of the Night” in the last RFC event. This will make for a perfect storm.

RFC favorite Alex Cruz is aggressive and his best punch “overhand right” is deadly. He is trim, lean and ready to fight out spoken Robert “Black Irish Red” Washington who has waited a long time to fight in the RFC. He comes from a hard life a foster child with no mother or father all of his life. Finding mixed martial arts has made him who is today — a changed man and an asset to society with a passion to fight. Now he can fight without getting in trouble and get paid for too.

RFC promotes some of the best fights in the state of Florida with fighters from around the world.

RFC 23 which will be streamed live is expecting 20,000 viewers in addition to a pack house of 1,500 . Live streaming on the web at www.rfcmma.com

For Tickets or table call the RFC office @ 813-964-9818 or Ticketmaster at www.ticketmaster.com