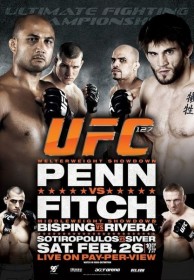 I must admit that I wasn’t really hyped for UFC 127 looking at it on paper, but the closer we got to the event, the more excited I became. The event surpassed my expectations — which tends to happen with events that don’t seem as intriguing at first glance — and I just want to touch on a few topics coming out of the event:

-First of all, the crowd in Australia was great. I was really impressed with the knowledge of the fans, and they were absolutely electric throughout the night. When a crowd is hyped like that, it always seems to fuel the fighters to give just a little bit more of themselves, and last night was no different. I applaud you Australian fans.

-The BJ Penn/Jon Fitch fight was a very close fight. I’m not upset at all by the majority draw. I had Jon Fitch winning the fight, believing he edged Penn in the second round, but I couldn’t be upset if anyone scored it for Penn. I thought Penn won the first round for sure. However, I had Fitch winning the third round with a score of 10-8. He simply dominated Penn the ENTIRE round, and Penn offered NOTHING in return. I questioned Penn’s game-plan of expending an enormous amount of energy in the beginning of the fight trying to take Fitch down. I think that played a huge part in him gassing later in the fight, even though he was able to take Fitch down a couple of times. I think he could have had success striking, and clinching with Fitch played right into Fitch’s hands. I know everyone is questioning what Penn is going to do with his career, and he’s even wondering about it himself. However, we must realize that he just fought the number two welterweight in the world to a draw. So any talk saying he should give it up is just premature, in my opinion. The problem is that Penn really seemed like he didn’t want to be in there during the third round. If that’s the case, then he should definitely walk away. A sub-plot to think about is whether Fitch’s new diet almost cost him the fight. A natural lightweight took him down with relative ease on a few occasions. His conditioning is always great, but there seemed to be no real difference between he and Penn in regards to strength until Penn gassed. I wonder if he’ll be able to match-up with other welterweights the same way he used to; it’s noticeable that he’s lost some muscle mass. I think you have to do a re-match, because neither deserve a title shot after that fight, and there’s nobody else in the division that has earned a shot right now.

-The Michael Bisping/Jorge Rivera fight went about how I thought it would. I’m not going to look too far into the post-fight antics from Bisping. I can understand him taking what Rivera said personally pre-fight, and who knows what Rivera said to him during the fight as they were certainly jawing at one another. I don’t support Bisping’s actions, but I can understand his position. I will say that knee he threw and landed clearly seemed intentional, although I obviously can’t prove that. I certainly didn’t expect Rivera to gas THAT quickly, but that knee to the dome took a lot out of him. I saw his life meter decrease when that thing landed. We really didn’t learn anything from the fight, except that Bisping is certainly the heel now. I think folks will tune just to see him lose, sort of like Tito Ortiz in his prime. Bisping still gets tagged with big right hands, and he still has zero power in his strikes. How many strikes did it take to put Rivera away? Not to mention he was loading up on each shot and still couldn’t drop Rivera. Someone on twitter said it best last night. Why doesn’t the UFC just go ahead and feed Bisping to Anderson Silva and watch the carnage unfold? That would be great.

-The Dennis Siver/George Sotiropoulos fight was great. Sotiropoulos showed a lot of heart coming back from the beating he took in the first round to make a fight out of it. I wrote about the sheer size of Siver being a factor in this fight, and it certainly was one of the determining factors. Siver was able to land that quick left hook repeatedly, along with his patented kicks. I don’t think this fight proves anything other than Siver is a bad match-up stylewise for Sotiropoulos. I think anyone with good take-down defense and striking can beat him. I think anyone with good wrestling and solid striking can beat Siver. I didn’t think either were in title contention before the fight, and I still feel that way. Great fight though.

-The Brian Ebersole/Chris Lytle bout was certainly entertaining. I thought Lytle would submit Ebersole, and he seemed close on a couple of occasions. However, Ebersole showed great resolve and landed a devastating knee in round two that showed just how tough Lytle is to put away. I think Lytle’s downfall was his attempts at the standing kimuras and going for guillotine chokes too much that left him in bad positions. I felt he was winning the stand-up portion of the — besides the huge knee. We didn’t really learn anything from this fight. We knew Lytle was never really going to be a contender at this point in his career. Ebersole going life and death with him pretty much tells the story for him as well, but credit to the newcomer for finally making it to the big show and performing well against someone like Lytle.

-The Kyle Noke/Chris Camozzi fight ended quickly. I noted that Camozzi is prone to submissions in the preview, and picked Noke to submit him. However, I didn’t expect it to be THAT quick. Great win for Noke and the Aussie crowd approved.

-It was of no fault of Nick Ring, but Riki Fukuda got absolutely robbed in that fight by the judges. There was absolutely NO way Ring won that decision. It’s just another case of bad judging in MMA, and I’m afraid it’s here to stay for a while until judges become more competent.

–Zhang Tie Quan’s win over Jason Reinhardt was a good first win. However, let’s be serious. A win over Reinhardt has to be put in context, considering that Reinhardt’s wins are over lackluster competition. Nevertheless, it could prove important in the grand scheme of things if Zhang keeps winning, with the UFC’s planned global expansion potentially into China.

-The Ross Pearson/Spencer Fisher fight went about as expected, a sparring session for the most part. Good job by Pearson to get back on the winning track. Could a rematch with Siver be on the horizon?

Overall, I felt the event went about as well as it could go with the fighters on the card. We had good fights, good submissions, and a couple of upsets. The only complaint would be the ending of the main event, but the end result was not a bad call by any means. If anything, we may get to see BJ Penn in the cage again, otherwise we may have watched one of the greatest fight for the last time.

Stay tuned to PROMMA Now (www.prommanow.com) this week as we provide full coverage of the UFC on Versus three event that will take place on Thursday, March 3rd. It’ll be headlined by a welterweight match-up between Diego Sanchez and Martin Kampmann.