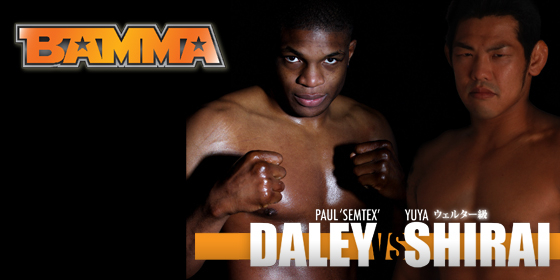 BAMMA 5 takes place this afternoon and will air live on Internet pay per view beginning at 4 p.m. ET, featuring Paul Daley vs. Yuya Shira in a non-title fight after Daley failed to make weight and UFC veterans James McSweeney and Ricco Rodriguez squaring off in a light heavyweight bout.

To get ready for the fights, don’t forget to check out Richard Mann’s BAMMA 5 predictions.

ProMMAnow.com will provide live results and play-by-play commentary once the action begins.

**Results from the two non-televised prelim bouts courtesy of Sherdog.com.

Round 1: Shirai starts the action with several glancing leg kicks. A short jab drops Shirai flat to his backside, but he hops right back up. He rushes in for a clinch, but he is pushed away easily. Another hard jab lands for Daley. Shirai eats a shot to get the clinch, but he can’t score a takedown. Daley lands a clinch knee when Shirai comes forward. The British fighter measures his opponent with a huge left upper cut. Then, Daley plants his opponent with his trademark left hook and this fight is over.

Paul Daley knocks out Yuya Shirai at the 1:46 mark of the first round

Round 1: Rodriguez starts things off with a kick, but the quickly closes the distance. He almost gets McSweeney down with a low single, but McSweeney escapes. McSweeney throws leg kicks with his hands down around his waist. Several land clean. Rodriguez comes in and McSweeney plants him with a right hand. Instead of follow to the ground. McSweeney backs away. Ricco catches a kick, but he can’t get the takedown. Another kick and Rodrgiuez presses McSweeney into the cage with a single. He goes to pick it up, and McSweeney stays up by grabbing the cage. The British fighter escapes the clinch and goes back to his kicks from distance. Rodriguez shoots a high double and finishes with an outside trip. He stays calm from the top in half guard. The guard is wide open, but Ricco does not try to pass. Rodriguez steps over for the same knee bar he hit on Antonio Rodrgio Nogueira in ADCC, but he can’t get it. He switches to heel hook at the horn sound. 10-9 McSweeney, but Rodriguez came on late.

Round 2: McSweeney tries a front kick of the face and then goes for a double jump kick. Nothing lands clean. Rodriguez charges in for the clinch. On his third try, he gets the takedown after a token guillotine attempt from McSweeney. Rodriguez works rights hands from full guard. Once again the guard is open. McSweeney gets his hips out and gets back to his feet. He does not stay up long as Rodriguez returns him with a double leg lift. The former UFC champion passes into half guard and lands some more meaningful elbows. Rodriguez turns him away from the cage and after some elbows McSweeney works back to full guard. Rodriguez steps out of the guard and gets to his feet. He defends the upkicks and passes to side at the buzzer. 10-9 Rodriguez.

Round 3: The rounds starts the same way the last one ended. Rodriguez gets the fight to the ground and lands light punches from guard. The former UFC champion works the old school body-body-head combination. Then, he passes to half guard. McSweeney kicks his knees up and gets back to his feet. Rodriguez still has the double and brings McSweeny back to the mat. At the horn, Ricco Rodriguez lands some light punches and presumably takes the fight. 10-9 Rodriguez. ProMMANow score 29-28 for Rodriguez

Round 1: The fighters keep their distance early. Makhonin tries a front kick that misses. Both fighters are staying out of range and blocking high kicks. Professor X drops Makhonin with a straight left. He follows it up with some knees and scores a takedown. Makhonin gets back to his feet, but eats a few knees before the break. The fighters clinch and Professor X lands several knees to the midsection. Makhonin gets free and throws a hard right hook that doesn’t land. Professor X lands a nice one-two and finishes with a hard leg kick. With 10 seconds left in the round, Makhonin got a takedown and took the back. He landed several rights before the bell. 10-9 Foupa Pokam

Round 2: Both fighters land kicks from distance and look fine. The fighters are throwing from distance and Foupa-Pokam is getting the better of it. Makhonin tries a double leg from distance, but Foupa-Pokam gets the clinch and lands a low blow that stops the action. Foupa-Pokam goes back to using the kicks from the outside. Makhonin tries another double leg, but it is not close. Foupa-Pokam gets inside control and presses the fight into the cage. He sends more knees to the gut. Foupa-Pokam goes for a throw and pulls Makhonin directly in mount. The punches start to rain down from the top position. but Professor X looks ok. Makhonin switch to elbows and is more effective. He opens a cut on Professor X. He works for an armbar, but goes back to the elbows. The referee stops the bout, and Foupa-Pokam gives a nominal protest.