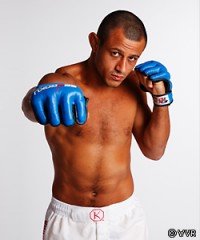 Sandro went 5-2 for the Japanese-based Sengoku promotion but lost his title belt to Hatsu Hioki on Dec. 30 by decision. The Nova Uniao product joins a growing list of fighters that have left the seemingly struggling organization, including middleweight champion Jorge Santiago and heavyweight prospect Dave Herman, both of whom have signed with the UFC.

“Marlon Sandro is a phenomenal talent at 145,” Bellator Chairman and CEO Bjorn Rebney said in a press release. “Our featherweight division is absolutely stacked and Sandro pushes that talent pool to an even higher level. I’m thrilled to have him on board.”

By signing with Bellator, Sandro ensures he won’t have to cross paths with two of his teammates, UFC champion Jose Aldo and top contender Diego Nunes.