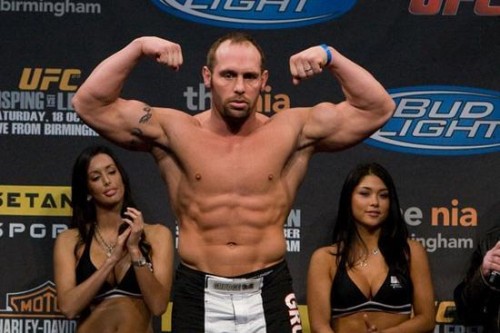 From Press Release:
Carwin was the 1999 national champion at 285 pounds after finishing runner-up in 1997 and 1996. He holds Mountaineer records in career falls and season falls and was a three-time RMAC, regional and Colorado Collegiate champion. Carwin was also a two-time All-America football player, and used what would have been his 1998 wrestling season to prepare for the NFL Combine.

Carwin graduated from Western State with a degree in environmental technology in 1999 and earned a second degree from Colorado Mines in 2004 in mechanical engineering. He was a three-time Division II National Wrestling Coaches Association scholar-athlete. Carwin is currently 12-1 as a heavyweight in the UFC, with his only loss coming to Brock Lesnar in the main event of UFC 116. He also maintains a full-time position as an engineer with the North Weld County Water District.

On his website, Carwin said, “I love the sport of Wrestling and it continues to love me back. I am honored to be inducted into the Hall of Fame. Wrestling is one of the greatest sports in the World. Thank you to MMA for giving us a home to continue our competitive ways.”