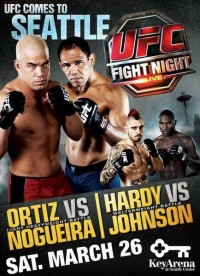 Tito “The Huntington Beach Bad Boy” Ortiz gave us a hint on Friday that something was wrong when he posted a Twitter message saying, “I have some [expletive] luck.”

This afternoon UFC President Dana White posted the news that Ortiz (15-8-1) has had to pull out of his March 26 scheduled headliner with Antonio Rogerio Nogueira at UFC Fight Night 24 in Seattle:

“Tito has pulled out of fight night due to getting stitches. 8-0 Phil davis will be fighting lil nog now and is pumped for this fight!”

Ortiz returned to Twitter again this afternoon confirming the news:

“22 stitches and a bad concussion sucks but I will heal and be better soon.”

There was no word on how Ortiz was injured, but most likely it happened in training.

Phil “Mr. Wonderful” Davis, who will replace Ortiz, is undefeated at 4-0 in his UFC career. He is coming off a second round submission over Tim Boetsch at UFC 123 this past November.

Nogueira (19-4) is a top 10 light heavyweight and a step up in competition for Davis (8-0). A win over the Pride veteran could put Davis in the top 10 rankings.

Nogueira fought twice in 2010, winning a split decision over Jason Brilz at UFC 114, and most recently, losing a unanimous decision to Ryan Bader at UFC 119 in September.