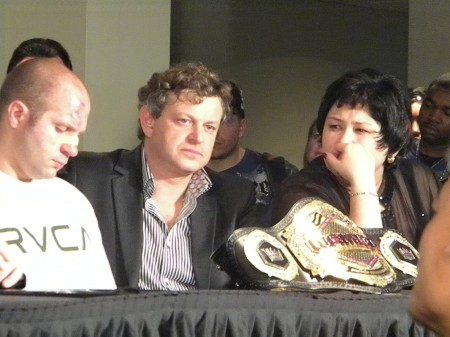 MMA fans from around the world were shocked last weekend when the once seemingly invincible Fedor Emelianenko suffered his second loss in a row. “The Last Emperor” found himself in a battle with a much bigger man with good stand-up and a black belt in jiu-jitsu.

In the second round of their Strikeforce heavyweight tournament quarterfinal bout, Antonio “Bigfoot” Silva took Fedor to the ground where he mounted him and landed numerous punches from top position. Fedor struggled to escape but “Bigfoot” maintained control for most of the round.

After 10 full minutes Fedor’s eye was completely shut and the doctor would not allow the fight to continue. Some people thought the stoppage was too soon and that Fedor should have been allowed to continue. In the end though, the doctor had the final say.

After the fight Fedor spoke about possibly retiring to the fans gathered at the IZOD Center in East Rutherford, N.J. and to the hundreds of thousands watching on Showtime. And this shocked the crowd even more than what they had just witnessed.

ProMMAnow.com (www.prommanow.com) was able to touch base with Fedor’s manager, Vadim Finkeltstein, this week to find out if Fedor’s mood had changed or if he was still considering retirement and to get his own thoughts about what he saw in the fight as well as his ideas about Fedor’s future.

PRO MMA NOW: Hello Vadim, thank you for taking time to speak with us again at PRO MMA NOW (www.prommanow.com). I hope you had a pleasant flight home to Russia. Overall, how was your trip to the U.S. this time and what are your thoughts on the overall event and the production and how everything was run for the event at M-1 Global and Strikeforce present “Fedor vs. Silva”?

VADIM FINKELSTEIN: If we talk about the fights, the battle between Sergei Kharitonov and Arlovski was one of the best. As for the event overall, it has long been known that U.S. shows are some of the best produced and this was confirmed once again. The crowd cheered for Fedor as he walked out. After the fight, it was clear the crowd was upset as well and even more so when Fedor spoke with emotion about possibly retiring. No one wanted to hear that. When we returned back to the hotel, Fedor was met with applause by fans and fellow fighters.

PRO MMA NOW: During Fedor’s fight with Bigfoot Silva, the first round was rather close, but many people had Fedor winning the first and Bigfoot winning the second. What was going through your mind during round two, were you worried they were going to stop the fight when Bigfoot was on top in full mount landing punches?

VADIM FINKELSTEIN: I was very worried during the fight. I was rooting for Fedor, waiting for the moment he would throw his opponent.

PRO MMA NOW: Why do you think Bigfoot had so much success in the second round?

VADIM FINKELSTEIN: Silva has advantages as an expert in jiu-jitsu and has a significant weight advantage over Fedor.

PRO MMA NOW: Are you glad they stopped the fight in order to save Fedor’s health? Was it the right thing to do?

VADIM FINKELSTEIN: I completely agree. The health of the fighter is first and foremost. It is better to get a technical defeat than suffer an injury by fighting blindly.

PRO MMA NOW: What was Fedor’s mood like after the fight, was he sad or disappointed? And was he critical of his performance?

VADIM FINKELSTEIN: Of course he was upset and unhappy. He himself has said that something went wrong. He still wanted to continue the fight.

PRO MMA NOW: What are your thoughts on Fedor’s performance in the fight? Did you see any mistakes he made?

VADIM FINKELSTEIN: I’m not the coach and not an expert to talk about ‘mistakes’. That is best left to the coaches.

PRO MMA NOW: Some people think that Fedor should fight at light heavyweight (205-pounds). What is your opinion on that?

VADIM FINKELSTEIN: I think it’s necessary for athletes to consider their weight class closely. The caliber of fighters in each class continues to evolve and needs to be taken into account as well.

PRO MMA NOW: Fedor has said that he considers you his very close friend. How did you and Fedor first meet, how long have you known each other and how did you come to be his manager?

VADIM FINKELSTEIN: I also consider Fedor a very close friend of mine. We first met in 2003. I respect him for his sincerity and honesty. In 2003 I suggested to Fedor that we work in cooperation with me as his manager and he agreed. I had been involved in MMA since 1997 and had a well-known name in the industry.

PRO MMA NOW: I have never heard Fedor say a bad word about anyone. I have never heard him use a curse word or swear. He is always so respectful and humble. He is almost like a Saint. I like to call him “The Saint of Stary Oskol.” Has he always been this type of person?

VADIM FINKELSTEIN: Fedor has been raised well. He can be best described as an honorable gentleman.

PRO MMA NOW: I know you said that you think Fedor will not retire and is not done fighting. Do you still feel that way and if he does keep fighting, when do you think his next fight will be?

VADIM FINKELSTEIN: Fedor has already announced that he plans to return and that the thought of retirement was spoken out of emotion after the fight. I’m sure he will return and show himself again..

PRO MMA NOW: I have heard M-1 has some big things planned. Can you tell us what the future holds for M-1 and if we are going to see M-1 Challenge Series on Showtime this year? (We have since confirmed M-1 is coming to Showtime)

VADIM FINKELSTEIN: In 2011, we’ll have four M-1 Challenge events in the United States and four more in Europe. The first Challenge is March 5th in Moscow and the first US-based event is March 25th. These M-1Challenge events will showcase the best fighters from Europe, North America, Russia and Asia. Fans can expect extremely entertaining fights. We will also be hosting several M-1 Selection events in four regions: Eastern and Western Europe, North America and Asia.

PRO MMA NOW: Vadim, thank you very much for your time. I can only say that I don’t think there is anyone who wants to see Fedor retire. He is loved all over the world and win or lose the fans still love him. Thank you for representing him in a good way and doing what you do too.

Stay tuned to ProMMAnow.com for an exclusive with the big man himself, Fedor, to hear his own thoughts on the fight as well as his future plans.

Vadim Finkelstein is the President of M-1 Global. You can keep up with all M-1 Global news including M-1 Challenge event and fighter information at www.m-1global.com.