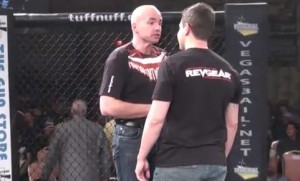 LAS VEGAS — This is just too funny not to post. So, Tuff-N-Uff decided to bring Aaron Tru and Lee Honish into the cage last night to face off to announce the signing of their upcoming fight in March.

After an exchange of words, Tru pushes Honish and they are separated briefly before Honish makes a run for him and all hell breaks loose.

The fiasco ends with Homish getting put in a choke hold by someone that looked a lot like Larry Mir before being escorted out of the building. Tru has a black eye.

You can read my initial reaction to what happened here as I was watching the fight card live online and posting results.

According to one report, the exchange of words between the two went like this:

Aaron: Why are you shaking

Lee: Because its taking every ounce of energy not to hit you, I promised them (promoters) you’d walk out

Aaron: Why are you shaking

Lee: Aaron, why did you make this personal

(SHOVED BY AARON, AARON RUNS OUT OF CAGE)

Lee: Bring his sad, fat ass back… Im not leaving

Lee: Let him back in, because it will take all of you to get me out of here including LVPD (Las Vegas Metro)

Lee: Deal is off Jeff, he’s not walking back out again…

(LEE ATTACKS AND IS TACKLED BY 5 PEOPLE, AARON IS HELD BACK BY 1)

Unknown Ref: Are you done?

(LEE IS THEN PUT IN CHOKE HOLD AT BOTTOM OF PILE)

Unknown Ref: Stop or we will choke you out and carry you out! We will call metro and have you arrested!

Lee: You Better, cause he’s (Aaron’s) not leaving the building

Unknown: Your out of the building

Lee: Jeff make sure your sad, fat — F**K friend makes in the cage next month