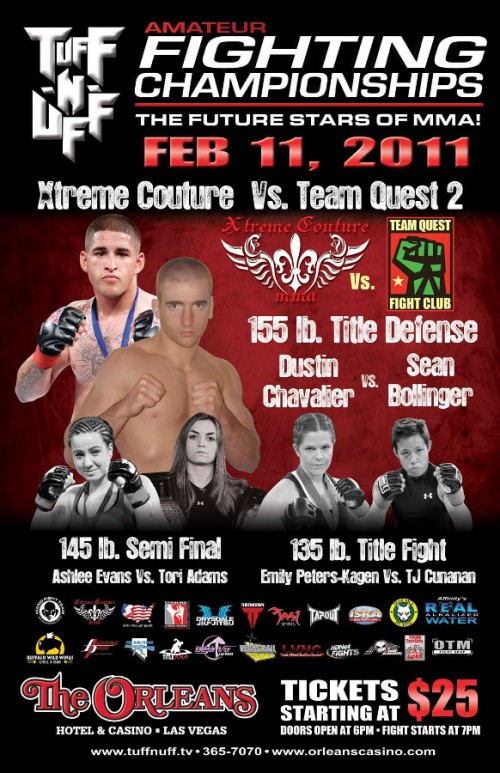 The card will also feature a women’s 135-pound title fight between Emily Peters-Kagan vs. TJ Cunanan and a bantamweight bout between Jerry Shapiro vs. Jamie Hernandez.

There are 15 bouts in all scheduled and Tuff-N-Uff unveils for the very first time, their brand new hexagon cage! ProMMAnow.com (www.prommanow.com) will provide LIVE results throughout the night.

Tyler Jeppesen and Jim Blakey put on an incredible fight to kick off the show. The guys went toe-to-toe and left it all in the cage.

Denny Prokops is Eddie Bravo’s first ever black belt. He looked amazing in the first round by taking it straight to the ground and threatened with numerous submissions. However, as round two started he never got the chance to get the fight in his domain as Campos dropped him early in.

Tori Adams looked good with her second round submission win over Ashlee Evans-Smith. Both ladies were undefeated coming in. Keep an eye on both of these women.

I actually can’t believe what I’m seeing right now. Lee Honish and Aaron Tru were called into the cage to announce their upcoming bout. There was some disturbance, the stream went blurry and the next thing I know Lee Homish was on the ground with commission people around him and Tru was ushered out of the cage. I don’t know if Tru hit him or what. LOL OMG that was freaking hilarious. Can’t wait to see that fight!!

T.J. “Soo-Bee-Doo” Cunanan won the women’s 135-pound Tuff-N-Uff title with a first round armbar over Team Jackson’s Emily Peters-Kagan. Cunanan said after the bout she’s looking to turn pro next.

Jerry Shapiro won a bantamweight title fight over Jamie Hernandez by unanimous decision. He said after the bout he gassed a little.

Sean Bollinger took Dustin Chevalier’s back while standing early in the fight, got his hooks in, flattened him out on the ground and choked him out and winning the Tuff-N-Uff lightweight title.