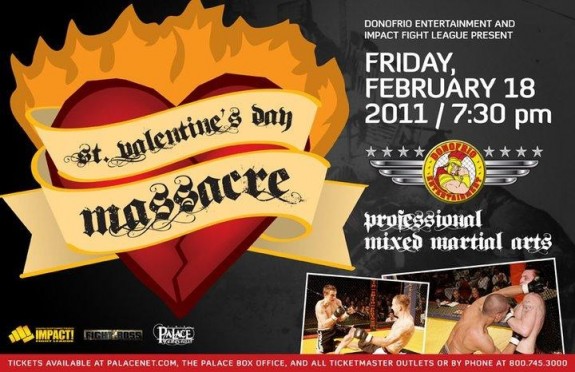 Seguin has been fighting professionally for over a decade and has been in the cage with many of the biggest and most recognizable names in the sport. He is currently riding a three-fight win streak and has stopped his last two opponents in the first round.

His opponent, Hector Urbina, is a King of the Cage and Bellator veteran and has has been in there with the likes of Jason “Mayhem” Miller, Lyman Good and Tim Kennedy. He is coming off a first round TKO of Ira Boyd at Bellator 6 in May 2009.

Joseph Donofrio, President of Donofrio Entertainment, commented on the event:

“The recent UFC event in this same building showed what rabid fans Michigan has for professional MMA. We are going to keep that wonderful momentum going by putting on the kind of show this state deserves. Hector will be hoping to have better luck than the Chicagoans at the first St. Valentine’s Day Massacre.”

The first UFC heavyweight champion and UFC Hall of Famer Mark “The Hammer” Coleman and longtime MMA veteran “Mr. International” Shonie Carter will be special guests to take photos and sign autographs for the fans.

There are a total of 13 fights scheduled for “The Saint Valentine’s Day Massacre” and the best part about it, is if you can not make it there in person to watch the fights, you can watch the whole thing LIVE online in a pay-per-view webcast for only $9.95 at Cagefighting Live (www.cagefightinglive.com).

Fight card is subject to change without notice.

You can learn more about Donofrio Entertainment and Michigan MMA at www.donofriomma.com.