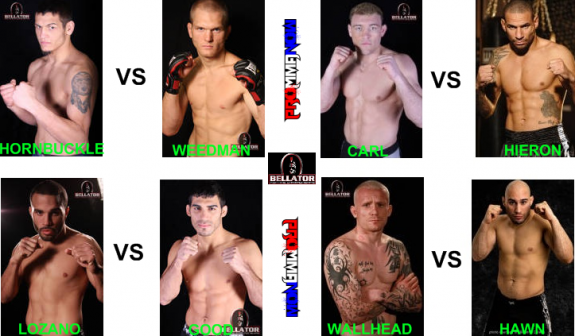 LEMOORE, Calif. — On Sunday, March 5, Bellator Fighting Championships will kick off their fourth season of professional mixed martial arts events with “Bellator 35” which will take place at the Tachi Palace Casino & Resort in Lemoore, Calif. and will air LIVE on MTV2.

Bellator 35 will mark the start of season four’s welterweight (170 lbs.) tournament and will feature all four quarterfinal bouts on the card. The match-ups are as follows:

Hawn (9-0), a 2004 Olympian, will look to keep his undefeated record in tact. Seveon of his nine wins have come by knockout and he is coming off a first round TKO win over LeVon Maynard at Bellator 33 this past October.

Steve Carl vs. Jay “The Thoroughbred” Hieron – Carl (14-2) is known for his submission game and is coming off a win over Tyler Stinson at Bellator 26 last August. Stinson would not tap and got put to sleep just 2:30 into the first round.

Hieron (19-4) is always dangerous and should be looked at as one of the favorites to win the tournament. His only problem may be some ring rust as his last fight was a unanimous decision over Joe Riggs at “Strikeforce: Miami” in Jan. 2010. He’s riding a seven-fight win streak.

Dan “The Handler” Hornbuckle vs. Brent Weedman – Hornbuckle (22-3) is a finisher. Out of 22 wins, only twice has he gone to a decision. After losing to Ben Askren in the season two finals, Hornbuckle would like to win this tournament to get revenge against Askren who is now the Bellator welterweight champion.

Weedman (17-5-1) has finished every fight he has won; ten by knockout and seven by submission. He would like to get redemption for a 2006 submission loss to Hornbuckle at Legends of Fighting 12 in Indiana. Weedman is currently riding a nine-fight win streak.

Lyman “Cyborg” Good vs. Chris “The Assassin” Lozano – Good (10-1) was undefeated until he met Ben Askren at Bellator 33 this past October and lost his title. Good was the first Bellator welterweight champion, earning it with three straight tournament wins in 2009 including a first round knockout of Omar De La Cruz in the finals.

Lozano (6-0) has had six fights and six knockout victories. His Bellator debut was a non-tournament bout against Yoshiyuki Yoshida at Bellator 31 this past September in which he won a second round TKO due to corner stoppage.