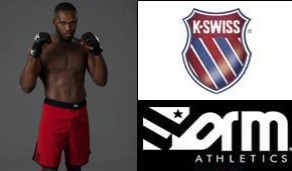 Through this new deal Jones will be collaborating with K-Swiss on a signature shoe and FORM Athletics will expand their current relationship with Jones to include a signature collection of performance and lifestyle apparel.

K-Swiss dove into the mixed martial arts world in 2010 when they purchased FORM Athletics and they currently have a stable of fighters that include such names as Urijah Faber, Anthony Pettis, Mark Muñoz, Scott Jorgensen and Joseph Benavidez.

Jones’ first official appearance under the K-Swiss/FORM Athletics banner will be this Saturday, Feb. 5, when he takes on Ryan Bader on the “UFC 126: Silva vs. Belfort” Pay-Per-View televised main card which will take place at the Mandalay Bay Events Center in Las Vegas, Nev.

Jones shared his thoughts on joining the K-Swiss/FORM Athletics family:

“I’m excited and honored to be part of the K·Swiss family, representing both K·Swiss and FORM Athletics. Working closely with Urijah is special to me, everything he touches turns to gold – he is and will always be a champion. It is my mission to create and develop products that include my personal style and will advance athletic performance in both training and competition.”