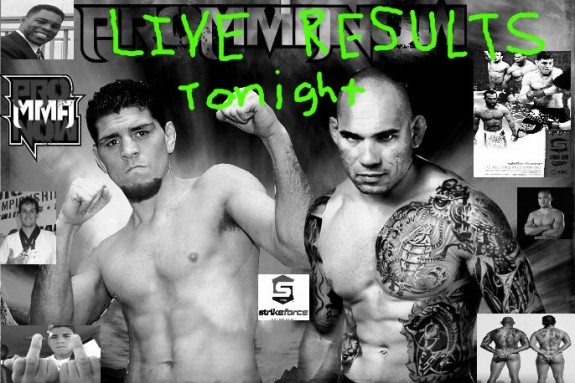 ProMMAnow.com‘s Matt De La Rosa will be on the scene at The Shark Tank tonight and will provide LIVE results and play-by-play commentary throughout “Strikeforce: Diaz vs. Cyborg” beginning with the preliminary card action which will start at approximately 8 p.m. ET / 5 p.m. PT. For extra insight, follow Matt on Twitter (@mattdelarosa) for other happenings at the Tank during the fights.

Co-headlining “Strikeforce: Diaz vs. Cyborg” is a middleweight tight fight between 185-pound champion Ronaldo “Jacare” Souza and hard-hitting H.I.T. Squad veteran Robbie Lawler. Herschel Walker will make his second appearance in the Strikeforce cage as he takes on Scott Carson in a light heavyweight bout, and rounding out the Showtime-televised main card is a light heavyweight bout between Jiu-Jitsu ace Roger Gracie and veteran Trevor Prangley.

Fans can catch the “Strikeforce: Diaz vs. Cyborg” main card live on Showtime starting at 10 p.m. ET/PT (delayed on West Coast). Be sure to check out our “Diaz vs. Cyborg” staff picks and stay close to the site after the fights for exclusive photos and post-fight interviews with the fighters.

Round 1 – Jenna Castillo making her pro debut comes out to a nice ‘pop’ from the San Jose faithful. Castillo pushes Gellner up against the cage early and working some nice knees to the body and controlling well with the Thai clinch. After a few exchanges on the feet Gellner is on the ground working a triangle while Castillo is pushing her up against the cage. Castillo postures up and is looking to work some ground and pound. Gellner goes for an arm bar attempt but Castillo picks her up a bit and drops her on her head, defending the hold. Their back on their feet. The horn sounds ending the first round. Castillo did more damage and kept busy despite the submissions attempts. 10-9 Castillo

Round 2 – Castillo starts things off with a nice upper cut. Geller goes for a takedown but Castillo winds up ontop. Both fighters are back on their feet exchanging. Gellner goes for another takedown but Castillo sprawls and turns it into a Guillotine, winds up in mount but Gellner is able to defend and put Castillo back in her guard. Both fighters are back on their feet and Gellner goes for another take down. Castillo throws a combo as Gellner comes in and stands her up. Another combo by Castillo rocks Gellner. The end comes with two knees to the face as the Ref stops it at 3:57 in round giving Jenna Castillo a win in her pro debut. Another big pop by the crowd for Castillo.

Round 1 – Terry looks to touch gloves but Gamaza declines. Both fighters circle in the middle and throw a few combos that sneak through but do no damage. Terry lands a solid right cross. Terry lands a solid 1-2 followed by a nice knee. Gamaza looks rocked but fights for a single and gets back up to his feet. Terry lands another hard right cross and Gamaza wobbles. Gamaza goes in for a single but half a dozen shots the head forces the referee to stop the fight. The official call is TKO due to strikes at 3:26 in the first round for Terry.

Round 1 – Webber goes in for an early takedown and de Randamie defends and works a clinch. Webber’s fighting for a single against the cage and finally gets de Randamie down to the center of the cage. Webber is trying to work in de Randamie’s guard but the Brazilian defends nicely. Webber tries to posture up for a bit but de Randamie defends. de Randamie goes for an interesting triangle attempt and keeps it locked in while on her stomach turned away from Webber. However, Webber is able to get back up on her feet. Webber gets de Randamie’s back and gets a few nice shots in but de Randamie is able to stand i up again. de Randamie works the clinch and lands a knee to the side of Webber’s head knocking her out cold. “Big John” stops the fight. de Randamie hops on the fence and licks her gloves BJ Penn style in celebration.

Round 1 – Lawson is in the cage first and gets a nicer crowd reaction than Keslar, who fights out of AKA here in San Jose. Lawson goes for a Judo throw but Keslar stuffs it. Lawson tries for a single but Keslar is able to take his back while defending. Keslar is trying to lock in a triangle. Keslar is visibly grimacing trying to lock in the submission. Lawson is defending but Keslar keeps tightening the hold. The referee stops the bout due to tapout via armbar. Keslar takes home the victory at 1:57 in the first

Round 1 – Hill starts off with a flurry and rocks Stack. Stack tries to fight back but Hill keeps pushing the pace. After a few more heavy shots Hill gets it to the ground and locks in a triangle for an end to a quick but exciting fight!

Round 1 – Moore and Coy trade shots but no real damage is done. Moore is able to get Coy’s back and is working with his back against the cage. Coy is able to stand up and dump Moore from his back. Coy has north-south position and Moore fights him off. Moore keeps position as both men start to stand up. Coy hits a nice knee and transitions to a single and get the take down. Moore gets it back up to the feet and the two men fight in the clinch but Coy gets Moore on his back again. The round comes to a close with both men locking up. Got to give that round to Coy. 10-9 for Coy.

Round 2 – The rounds starts of with a brief exchange until Moore lands a wicked right cross followed by a jab. sending Coy to the canvas and ending the fight. Moore set up the right with a nice feint.  The call is :25 in the second round. Knock Out victory for Moore

Round 1 – The main card begins with Trevor Prangley coming to the cage to Drowning Pools: Let the Bodies Hit the Floor. If I had a dollar for every time a fighter came out to that song. Roger Gracie comes in the cage looking very relaxed for this Light Heavyweight bout. A slow start to the fight causes some of the fans to begin booing less than thirty seconds in to the fight. After a slow start to the fight Gracie begins to clinch up with Prangley and takes him down up against the fence. Grace is doing a good job of controlling Prangley’s wrist and is able to transition to mount. Prangley is able to prevent Gracie from posturing up but Gracie is able to get Prangley’s back and work for a rear naked with less than a minute to go. Gracie locks in the body triangle and secures the choke. The South African from AKA is forced to tap out.

Round 1 – Carson throws a big head kick that stuns Walker a bit but the NFL vet responds with a big right hand that knocks Carson down. Walker gets Carson’s back and lands some punches. Carson begins to stand up but Walker picks him up and drops him down to the mat to the cheers of the crowd. Walker still has Carson’s back and after a few knees to the body and punches to the skull, Walker knocks out Carson’s mouth piece. Carson is not defending well at all. The ref nearly stops the fight but Carson is able to flip over on his back and tries to get Walker in his guard. Walker stands up and as Carson tries to get to his feet walk lands a blow that knocks Carson back down and the referee steps in for the save but not before Walker gets in one small left.

Round 1 – To start off the fight the crowd yet again starts booing thirty seconds in. Can’t say they aren’t consistent here at HP. Souza is able to get into side control after the takedown. The champion is hitting Lawler with a few shots trying to improve position, Lawler bucks and get the fight back to the feet. After a big right by Souza, Lawler answers back with a few big shots that send the champion down and Lawler is now working in Souza’s guard. Souza works open and closed guard. Lawler gets in a shot just before a stand up by McCarthy. Lawler lands a few more strikes and Souza grabs a takedown before the round comes to a close. Hard to say what the judges are looking for, Souza had the best position but Lawler did more damage on the feet. 10-9 Lawler.

Round 2 – Souza shoots in but Lawler stuffs the takedown. The champion resets and gets the take down. Then, briefly, gets into mount but works in Lawler’s half guard. Souza moves into side control and then transitions beautifully to north-south. The Brazilian works in side control again and is peppering Lawler with shots to the face to the displeasure of the crowd. Souza is controlling Lawler with hardly any difficulty. After an unusual transition to mount Souza works from the feet with Lawler on the ground and then goes for some very slick arm bar attempts. Lawler is able to get out from underneath Souza before the round comes to a close to the cheers of the crowd. 10-9 Souza.

Round 3 – Souza works some knees from the clinch before trying a single leg but Lawler defends. After another attempt Souza is successful in his attempt to take down Lawler against the cage. Souza lands a nice knee to the body in attempts to take Lawler’s back. He’s able to take Lawler down and has a body triangle and working a rear naked choke. The champion sinks in the choke and Lawler taps out. Souza’s first title defense is a successful one.

Round 1 – The crowd gets on their feet for Diaz’s entrance to the cage. The people are hot for this fight and the horn hasn’t even sounded yet. Nice stare down. Cyborg lands some nice inside leg kicks but Diaz lands a nice combo and puts Cyborg up against the cage. After separating Cyborg lands a few nice shots but Diaz answers back with a few of his own. Both fighters are trading nice shots on the feet. After a few clean shots by Santos, Diaz shrugs them off and lands a big left hand that stuns the challenger and Diaz hits some nice body shots as Cyborg is up against the fence. Exciting action here in the last two minutes as both men go toe to toe on the feet. Diaz sneaks in a good cross before the horn goes off. 10-9 Diaz

Round 2 – The round starts off much like the last. A few kicks that miss and then both men land some nice shots but they continue to press forward despite taking clean shots. Diaz lands a knee followed by a clean 1-2 combo. Cyborg continues to go for the clinch but isn’t able to lock it in. Santos seems to be throwing his kicks off of his heels and Diaz gets out of the way with ease. Cyborg answers back with a good knee to the body. Cyborg gets a takedown but Diaz is able to bait Santos by hooking his arm under Santos’ leg and locks in an Arm bar and gets the tap and the victory. Replays show that Diaz also used Cyborg’s ankle to roll him onto his back to help lock in the submission.