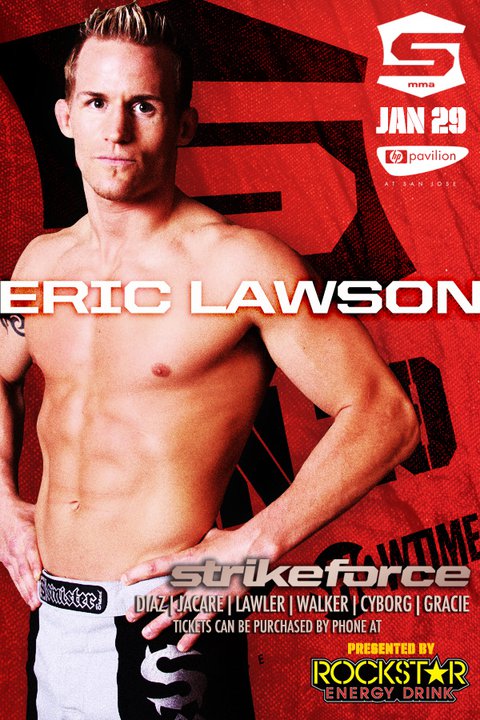 A 9-3 professional MMA record and five fights in Strikeforce are not two things that one might see as synonymous with successfully managing a full-time career outside of MMA. But Eric Lawson has done just that, and continues to work for success in the cage as he looks for a win over Ron Keslar at this weekend’s “Strikeforce: Diaz vs. Cyborg” event in his sixth fight with the promotion.

Pro MMA Now (www.prommanow.com) caught up with Lawson this week to get some thoughts on his upcoming opponent, fighting for Strikeforce, and his busy training and work schedule.

PRO MMA NOW: Without much of a combat sport background, you don’t seem the type to have gotten into such a productive fighting career – how and why did you get into MMA?

ERIC LAWSON: Actually my Dad was a big wrestler so he got me started wrestling at age 9 so I pretty much spent my whole life attacking people [laughs] so I’d say I DO have a combat sports background and after wrestling people to the ground my whole life, it seemed that adding some punches into that would be no problem so MMA was a natural progression. I mean, what does a 24 year old wrestler do after college ?

PRO MMA NOW: You’ve been fighting for almost seven years now – what do you think about the growth the sport has had since you first started?

ERIC LAWSON: Its amazing how much it’s blown up in such a short period of time. I truly believe that one day it will be the most popular sport in the world. It touches on people’s natural survival instincts. In the back of everyone’s mind, they always envision a scenario as to what would happen if they physically had to defend themselves and MMA is as close to that as you’re going to get with a sport that’s accepted by main stream society.

PRO MMA NOW: What do you think of your upcoming opponent Ron Keslar?

ERIC LAWSON: He’s tough, strong wrestler, good BJJ, and is not afraid to stand and bang so it’s going to be a war.

PRO MMA NOW: Who are you training with to get ready for this fight?

ERIC LAWSON: I’m training with all my teammates at Combat Fitness and a few other local gyms like Crispim BJJ. I’ve got great training partners.

PRO MMA NOW: Your last five fights have been with Strikeforce – what do you think of the promotion?

ERIC LAWSON: I love it. It’s my hometown promotion so I’m honored to fight in the cage for them and being a local I always have a large crowd to cheer me on so its a blast!

PRO MMA NOW: I understand you’re still working full time as a real estate finance agent – how are you making time to get in the training you need?

ERIC LAWSON: As a loan agent am I am self employed, so I can adjust my schedule accordingly to where I need to be focusing my time. Right now I’m training full time and doing loans part time. After the fight, I’ll switch that schedule around.

PRO MMA NOW: Are you planning on making a career out of MMA, or are you going to continue with your day job as well?

ERIC LAWSON: I do plan on making a career out of MMA as my full time job and whatever free time I have outside of that schedule, I’ll use to generate side income through real estate since I’ve got the means and know how. If anyone reading this needs any honest mortgage info or advice, contact me at EricLawsonLending.com.

PRO MMA NOW: Walk me through a typical day in your life – what’s your work schedule versus your training schedule?

ERIC LAWSON: 9am – Cardio conditioning or grappling. Mid day is spent at the office working on loans. Then from 5 to about 8 or 9 its grappling, sparring, and MMA training. So pretty much I train, work, train, then sleep. That’s it. No rest for the wicked !

PRO MMA NOW: Coming off the loss to Wayne Phillips, what are you working on now to get you back on the winning path?

ERIC LAWSON: I took that fight on short notice so was just not well prepared. Having learned that lesson, I ‘ve taken the time to prepare in all areas of my fight game so I’ll be ready for any possible fight scenario.

PRO MMA NOW: You live within striking distance (no pun intended) of some high profile fight teams – why have you chosen to train where you do?

ERIC LAWSON: I do some training with people like Gilbert Melendez and Jake Shields when I have fights scheduled. I just have good places and good people to train with locally so I don’t need to commute a far distance everytime I need to get a training session in. Also, working a day job leaves me with less time to travel like that when I’m training six days a week.

PRO MMA NOW: Thanks for talking with me Eric, is there anyone you’d like to thank?

ERIC LAWSON: Shout out to Lex, Mc Hammer, and Kelly at Alchemistmangement.com. My coaches Gil Castillo & George Tsutsui at www.maxcombatfitness.com and www.booster.be. Special thanks to Rob Gibson and everyone at the UFC Gym for my cardio training.