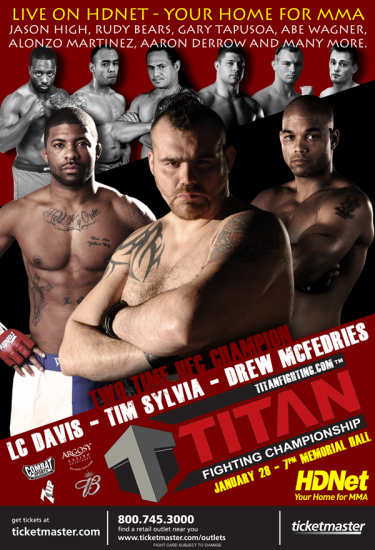 KANSAS CITY, Kan. — Titan Fighting Championships 16 takes place this evening at Memorial Hall in Kansas City, Kan. The event is headlined by former UFC heavyweight champion Tim Sylvia, looking to get his fifth win in a row as he takes on TUF 10 veteran Abe Wagner in a super heavyweight bout.

Be sure to check out our exclusive interviews this past week with both main event fighters, Tim Sylvia and Abe Wagner.

Round 3 – Inside leg kick then a crescent kick from McFedries, another crescent kick up side Tapusoa’s head. He’s picking Tapusoa apart with punches and kicks. McFedries’ striking looking very good, very good. McFedries counters and lands a shot behind the head with a right. McFedries is almsot playing with him now. Leg kicks, punches, over and over, slipping shots, jab, jab, leg kick. Just a beautiful display from McFedries and Tapusoa’s face is a bloody mess. Great head movement from McFedries as he slips all of Tapusoa’s punches. Tapusoa can’t seem to land anything now and his eye is looking bad as McFedries keeps aiming at it. McFedries looking like a pro boxer in there tonight, putting on a real show and finally the ref has seen enough and stops it.

Round 1 – Spinning backfist from Clementi. Derrow with the takedown, scramble, back up and Clementi takes Derrow down. Clementi on top in half guard as Derrow holds on. Clementi postures up tries to pass but Derrow is showing a nice guard. Clementi stands up, kisses his fist and dives in with a punch. Derrow haa full guard control, closed, and holds on to Clementi’s neck. Derrow throws up his legs, finally Clementi tells him to get up. They clinch, Clementi with underhooks and knees. Derrow with the takedown. Clementi with an elbow to the ear. Clementi on the bottom, he rolls, ends up on his feet at the bell. Clementi should have the round 10-9.

Round 2 – Goes to the ground early, they get back up but Clementi gets the takedown as Derrow throws up his legs looking for a sub. Derrow with butterfly guard and Clementi steps over the butterflies and lands in mount. Derrow regains half guard as Clementi lands some hammerfists. Clementi takes Derrow’s back, gets his hooks in and softening Derrow up with punches. Derrow spins and ends up on his back with a closed guard. Rubber guard from Derrow, lets it go and Clementi stands up, dives in with a shot and is back inside the full guard. Derrow gets hold of a leg and triangles it. Clementi punches his legs as the round ends. Clementi should have the round 10-9.

Round 3 – Leg kick from Clementi but Derrow lands a big punch. Nice shot from Derrow again. Big leg kick from Derrow. Derrow misses with a high kick and Clementi rushes him with a takedown, mounts him and starts landing punches. Derrow gets a knee in there and recovers butterfly guard. Stalemate and the ref stands them up. Both guys land some nice punches, then they clinch against the cage. Two and a half minutes to go. Knee to the body from Clementi. Derrow tries to jump guard and falls to his back in the corner of the cage. He throws up a triangle and Clementi is locked in tight. Clementi is asleep in about ten seconds! Amazing amazing comeback from Derrow! He showed a great guard the whole fight and you could tell he was a very talented grappler. Wow! That’s the biggest win of Derrow’s career.

Round 1 – Touch gloves. High gets a single leg takedown right away. Locks on a guillotine and Rudy Bears is ASLEEP, out cold. Two guys get put to sleep back to back. You don’t see that very often. High submitted “Mach” Sakurai in his last fight, now this. Beautiful, quick win. That’s one of the fastest submissions I’ve seen in quite some time.

Round 1 – Wagner weighed in at 258 lbs., Sylvia weighed in at 311 lbs. Sylvia only has a one inch reach advantage. Sylvia is the big favorite here. Here we go, big man comes out quick. Leg kick from Wagner. Tim slips all his punches. But Wagner lands a big right, he drops Sylvia, the ref steps iin. Wagner landed a big right that stunned Tim and he never stopped punching until Tim went down. The ref stepped in, then tried to let it go, second guessing himself, but then went ahead and called it off. The replay shows it was probably the right call. The crowd boos the decision. — Somebody won some big money tonight! (not me, but somebody)