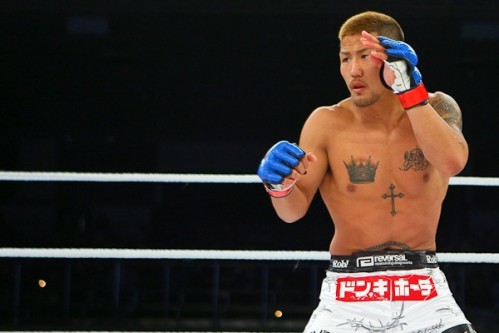 Last week, news broke that SRC training player Shigeki Osawa would make his Shoot Boxing debut. Now, it has been announced that he will meet Hiroaki Suzuki on Feb. 19.

Shoot Boxing is described as “standing vale tudo.” The sport is basically kick boxing rules, but it also allows standing submission and point-scoring takedowns and throws.

Along with Maximo Blanco, Osawa was one of the two original SRC training players. The wrestler receives a salary and training stipend from the promotion to aid his MMA career. He is still competing actively in wrestling and hopes to earn a spot on the Japanese national team for the 2012 Olympics in London.

Osawa made his MMA debut in 2009 and won his first four fights. His tasted defeat for the first time when he met Ronnie Mann at SRC 11. However, since then he is undefeated with two wins, a no contest and a draw. In his last fight, he drew with Cage Force mainstay Tomonari Kanomata.

Suzuki is currently the number-one ranked Japan super featherweight in Shoot Boxing. His record currently stands at 10-3 and in his last fight he knocked out Pride, Dream and Strikeforce veteran Mitsuhiro Ishida.

MMA fighters have been successful in the hybrid sport. Recently, two-time Bellator tournament runner-up Toby Imada reached the finals on the 2010 S-Cup. In the semi-finals, he defeated veteran Shoot Boxer Andy Souwer.