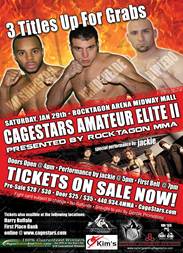 His opponent Tony Dipiero (5-4) represents Rising Dragon in Cleveland, Ohio. Dipiero is a well-rounded mixed martial artist with notable submission, TKO, and unanimous decision victories. Dipiero is hungry for the title and is determined to emerge as the new Cage Stars Amateur Elite Series light heavyweight champion. Both contenders feel they are worthy of the title, but only one will raise their hand in victory at the end of the night.

Join Rocktagon MMA on January 29th for a night of non-stop entertainment! Tickets range from $25.00 to $35.00 at the door. Save $5.00 now by purchasing your tickets in advance! Tickets can be purchased online at www.rocktagonmma.com or at the door the night of the event.  Limited VIP Tables are also available. Please call 440-934-4662 for more information.

Ohio based Rocktagon MMA is a premier mixed martial arts and entrainment group dedicated to hosting quality events and taking highly skilled MMA fighters from obscurity to the National level. At Rocktagon MMA we treat each fighter like an individual business. We focus on the fighter, their skills, and their image, as we help them build a strong presence in the mixed martial arts arena. For more information about Rocktagon MMA, please visit www.rocktagonmma.com.

1 thought on “Burton vs. Dipiero at Rocktagon MMA Event on January 29”