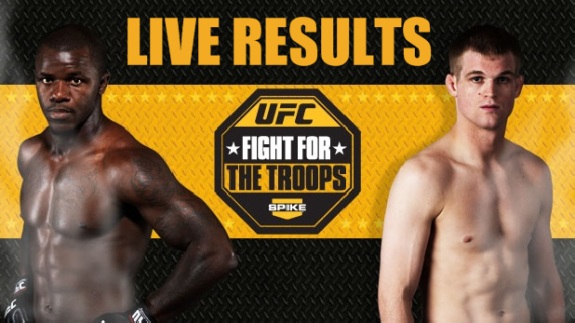 KILLEEN, Texas – “UFC – Fights for the Troops 2” takes place this evening on the Fort Hood army base in Killeen, Texas, in front of our brave men and women serving in the U.S. armed forces.

The event is being held to support the Intrepid Fallen Heroes Fund (www.fallenheroesfund.org), whose purpose is to assist soldiers suffering from Traumatic Brain Injury (TBI). You can learn more about TBI and the UFC’s involvement on this week’s Ultimate Insider.

Evan Dunham and Melvin Guillard will headline the televised portion of the card in a lightweight showdown with possible title implications. “UFC – Fight for the Troops 2” will air LIVE on Spike TV tonight at 9 p.m. ET/6 p.m. PT.

A total of five fights are scheduled to air on Spike TV, while two preliminary card fights, Yves Edwards vs. Cody McKenzie and Mike Guymon vs. DaMarques Johnson, will stream LIVE on the UFC’s Facebook page (www.facebook.com/UFC) starting at 8 p.m. ET/5 p.m. PT.

ProMMAnow.com (www.prommanow.com) will provide LIVE play-by-play results and analysis throughout the evening. If you would like to see our thoughts and predictions on each fight check out our “Fight for the Troops 2” staff picks.

“Fight for the Troops 2″ quick results:

“Fight for the Troops 2″ play-by-play:

Round 1 – Guymon shoots, stuffed, clinched. Johnson ends up throwing Guymon down and lands on top, is in side control. He mounts, but Guymon recovers full guard quickly. Guymon eats an elbow, another one. Johnson in half guard, moves to side control then full mount. Guymon gives up his back, Johnson gets his hooks in and puts a body lock on and is landing some punches softening Guymon up. Johnson looking for the choke as Guymon struggles and rolls to his belly. Guymon taps out and is injured. It appears the tight body triangle hurt him.

Round 2 – Nice combo of punches from Edwards and he’s picking Cody apart, flying knee, body shot and Cody covers up, lands a right hook. Spinning elbow attempt twice from McKenzie. Two big leg kicks from Edwards. McKenzie shoots, gets a takedown and has Edwards’ back. He gets mount, side control. Edwards gets half guard but McKenzie lands several punches and regains back control with full body lock. McKenzie landing several shots and the crowd chants “Cody”. Edwards turtles up and stands up but Cody stays on him and drags him back down. Edwards ends up on top and mounts Cody. Yves with some ground and pound and takes Cody’s back, locks on the rear naked choke and Cody refuses to tap and goes out cold. He wakes up a few seconds later. The veteran prevails. Ref stopped it at the right time, recognizing Cody was unconscious. Cody McKenzie loses for the first time.

Round 1 – Leg kick from Wiman. Again. Combo from Miller, lands some nice shots, they clinch. Wiman throws shots but Miller’s defense is superb. Elbow from Miller. Miller’s striking looks good and loose. Combo followed by a leg kick from Wiman. Clinched, release. Collar tie, knee from Miller. Uppercut from Wiman, clinch. Miller backs out and Wiman hunts him down. Repeat. Wiman keeping on the pressure. Knee from Miller, tries to jump guard but lands on his back hard. Wiman stands over him with punches. Miller grabs an ankle, lets it go as Wiman moves to half guard. Hammerfist and elbow from Wiman on top. Wiman postures up and is pounding, double hammerfists. Elbow. Great showing from Wiman 10-9.

Round 2 – Inside leg kick from Wiman. Wiman dives on a guillotine. Scramble and Miller is back up but gets tossed to the ground on his back. Wiman postures up as Miller grabs a leg. Wiman gets free, moves to half guard, lands some shots. Miller gets up and Wiman attacks. Big leg kick from Wiman. Miller tries to adjust his knee brace and Wiman attacks. Knee from Wiman and Miller goes down, mostly off balance I think. Wiman puts on the pressure. Big right hand and several punches. The pressure from Wiman is overwhelming Miller. Double hammers from Wiman and relentless ground and pound. Miller has full guard but Wiman staying busy with the ground and pound. Miller’s knee brace is now around his ankle and Wiman’s attack continues until the bell. Wiman 10-9.

Round 3 – Miller is talking to Wiman. Leg kick from Wiman. Clinched, knees from both. Wiman dives on a guillotine and mounts Miller. Wiman in half guard, body shot as he still holds Miller’s neck. Lets it go and postures up. Miller covers up as Wiman punches over and over. Miller covers up, grabs a leg but Wiman gets free and continues to shut Miller down, elbows and punches. He postures up again with two minutes to go. Miller with rabbit punches from his back. Miller has a body triangle but he needs to do something other than hang on. Wiman grinding out the victory, he stands up, kick to the thigh and attacks, trying to finish, takes Miller’s back. Wiman stands up and pounds away as Miller can’t do anything. Complete absolute domination from Matt Wiman. 10-9 for the round and 30-27 for the fight as I see it.

Round 1 – Clinch, knee from Beltran. Beltran turns Barry to the cage. Barry with wrist control. Barry gets his wrist free and throws some body shots the looks for the takedown, grabbing a single. Ref separates them. Leg kick from Barry. Another huge one. Head kick misses by Barry. Beltran lands a combo of punches, the clinch and Barry eats a groin shot but the ref lets it go. Beltran pushing him against the cage. He drops for a single but Barry defends it. Beltran lands another groin shot and the ref stops i this time. Barry tells Beltran to come on man. Barry looks pissed. Bell sounds. Got to give that round to Beltran I guess. Not a lot of strikes thrown and we get a few boos from the crowd. 10-9 Beltran.

Round 1 – Leg kick from Roop, then a body kick. Front kick from Roop, leg kick. Hominick hunting and Roop trying to fend him off. One big righ and Roop goes down. Roop shoots, stuffed. Leg kick from Roop. Flying knee from Roop and he falls. Gets up eats a big shot, another one. Hominick drops him with a huge shot, a big left hook, then follows up with a right. Ref stops it and although Roop protests, when he tries to get up he stumbles. Definitely a good call. And Mark Hominick just earned himself a title shot against Jose Aldo.

Round 1 – Body kick from Dunham. Big right hand from Guillard. Dunham shoots, eats a hammerfist. Dunham grabs Guillard and gets the takedown. Guillard gets his back against the cage trying to wall walk. Guillard gets up and lands several shots. Kicks, blocked. Combo from Guillard. Front kick from Guillard. Jumping roundhouse from Guillard. Big right body shot from Guillard and a one two punch. Guillard drops Dunham with a big punch. Dunham grabs a single but is eating a lot of punches. Guillard drops Dunham with a huge right hand. Guillard grabs a collar tie and lands a smashing knee to the head, Dunham is done as Guillard finishes him off with another knee. One knee looks to be illegal as Dunham is on the ground but it wouldn’t make any difference, he was already done. Beautiful performance for Guillard and I’m kicking myself now for not picking him when I really wanted to. Does Guillard deserve a title shot after that? Dunham was supposed to get one and he absolutely destroyed Dunham, so why not?