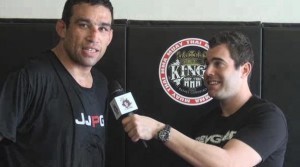 Known for his in-depth documentation of the school lunch program in Palm Springs that led to the discovery of a vitamin A deficiency in the milk and highly regarded as the only man to ever infiltrate the secret society at Yale for retired librarians, Aaron Tru is back with a one-on-one with Strikeforce heavyweight Fabricio Werdum.

Fortunately for the young journalist, he comes out of this interview unscathed. Unlike that time Werdum knocked the breath out of him by tossing him to the ground like a sack of potatoes (see video at 3:00 mark) and that other time he made him cry like a baby with a leg kick (see video at 4:19 mark). This time, the focus is on Alistair Overeem, Werdum’s first round opponent in the Strikeforce heavyweight tournament.

The last time the two fought, Werdum submitted Overeem via kimura. Werdum says Overeem talks too much, and the last time he took his left arm, but this time he will submit Overeem with his right arm. Werdum confirms their bout will take place in April and says, “Wait, I will shock the world one more time, believe me.” Werdum also comments on the upcoming title fight between Nick Diaz and Evangelista “Cyborg” Santos and says 100% absolutely that Cyborg will defeat Diaz.