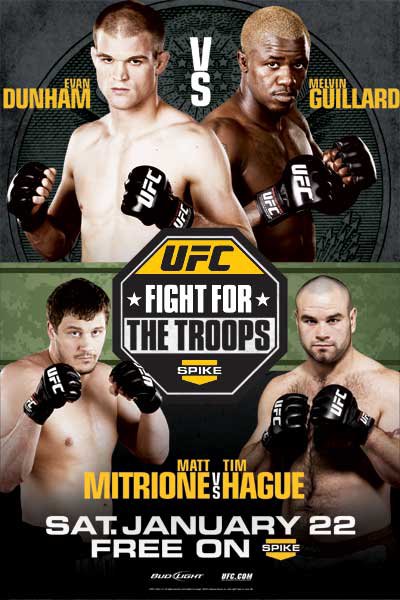 The UFC’s “Fight for the Troops 2” event takes place this Saturday, Jan. 22, at the Fort Hood Army base in Killeen, Texas. The event is being held to raise money for the Intrepid Fallen Heroes Fund, a charity created to help soldiers suffering from Traumatic Brain Injury.

Headlining the card, which will broadcast live on Spike TV at 9 p.m. ET, is a lightweight bout featuring Evan Dunham vs. Melvin Guillard. Also competing on the televised card is a heavyweight match-up between Matt Mitrione and Tim Hague, a featherweight bout between Mark Hominick and George Roop, Pat Barry vs. Joey Beltran, also at heavyweight, and Cole Miller vs. Matt Wiman at lightweight.

As always, the Pro MMA Now (www.prommanow.com) staff has come together to share our thoughts and predictions on the fights. These are our ProMMAnow.com “UFC: Fight for the Troops 2” staff picks. Enjoy.

BRIAN FURBY: I’m actually more excited about this fight than I was Florian/Dunham. Guillard brings more explosiveness to the table and could push the pace early. However, if Dunham can withstand the early onslaught, he’ll get the better of Guillard on the ground. Dunham wins by submission in Round 2.

JOHN BUHL: I don’t doubt that Guillard has finally dedicated himself in training and improved at the Jackson camp. Maybe he’s no longer as susceptible to submissions as he was in years past, which has led to most of his losses. But until I see Guillard pick up a big win (and no, I don’t count the lackluster performance against Jeremy Stephens or a split decision win over Gleison Tibau), I have to stay on the Dunham bandwagon. Despite the loss, Dunham showed a lot of toughness against Sean Sherk and really took control of that fight once he pushed the pace more and looked more confident. Melvin’s dangerous standing and tough to take down, but Dunham will find a way to do it and get a submission in round three.

RICHARD MANN: Evan Dunham is the better striker and grappler. If Melvin Guillard chooses to fight on the feet, he will get picked apart. If he decides to get takedowns, Dunham will surly submit him. Dunham by submission.

DENNY HODGE: Guillard swears he is finally focused and that fans will see that he is title-shot worthy in 2011. Dunham will be more than ready to prove the same, and will weather an early onslaught from Guillard, who will likely come out fast swinging for the fences. Dunham will then take control of the fight, by winning in the transitions and scrambles, and will come out on top for a decision victory.

JACK BRATCHER: Melvin Guillard is an exciting fighter, a great athlete with a ton of talent. Now that he has buckled down and is focused under the leadership of Greg Jackson, the sky is the limit for the dangerous knockout artist. However, his weakness usually comes against strong submission fighters such as Nate Diaz, Rich Clementi and Joe Stevenson. The bad news is, Dunham has a very strong submission game. This is a great match-up and there is a lot on the line in this fight. My heart goes with Guillard but at this point Dunham is the safe bet. Dunham by submission.

BRIAN FURBY: I like Mitrione in this fight. He’s adapted to the sport well, will continue his streak in the UFC with a quick stoppage of Hague. Mitrione via TKO in Round 1.

RICHARD MANN: Matt Mitrione might still be a bit raw, but he should be able to win this one. Tim Hague struggled during his first stint in the UFC. Mitrione has shown that he has picked up several aspects of the MMA game well. Look for Hague to have trouble dealing with Mitrione’s power on the feet. Mitrione by TKO.

DENNY HODGE: Hague has the experience, but Mitrione improves every time we see him. Mitrione’s kicks and power in the clinch will be the difference in the fight. Mitrione by referee stoppage due to strikes.

JACK BRATCHER: The Meathead train is rolling on and it’s making a bee-line for Tim Hague. Will Hague’s experience and more developed skill be enough to derail Mitrione? I really like this match-up and it will give us a good gauge of just where Mitrione is. We can’t underestimate Hague’s hunger as this is his first fight back in the UFC after getting cut last year following three straight losses. He put together wins over Zak Jensen and Travis Wiuff and that was enough to get him back in the Octagon, but he’s got a tough test against the former NFL player. Mitrione knocked out Kimbo Slice baby, and don’t you forget it! Mitrione by TKO.

BRIAN FURBY: The oddsmakers have Hominick as a decent favorite in this one, and that’s a good call. Of course the UFC agrees as they’ve announced Hominick is next in line for a title shot with a win over Roop. But Roop is a gamer and he always come to bang. I’m taking Hominick in this one, but am tempted to call Roop as the upset of the night. Hominick via TKO in Round 3.

JOHN BUHL: I underestimated Roop a lot in his fight with The Korean Zombie…a lot. I won’t make that mistake again. It’ll be interesting to see how Hominick deals with Roop’s height advantage. But Hominick is just too polished on the feet and should take this by decision.

RICHARD MANN: George Roop had ridiculous reach at lightweight. Now that he is at featherweight, he will have an even bigger advantage. Despite this advantage, Mark Hominick should be able to take a decision here. The best aspect of Hominick’s stand up game in his ability to fight at a proper distance. Plus, these fighters have trained together in the past, so Roop will not have any surprises. Hominick by decision.

DENNY HODGE: Roop at featherweight will give him an even more of a reach advantage than ever. It’s unbelievable that he could make 145 at his height. I underestimated Roop in his last fight, but I don’t believe he will repeat with another performance like that this time around. Hominick is just too well rounded for him. Hominick by decision.

JACK BRATCHER: These guys used to train together under Shawn Tompkins, however Roop had to go elsewhere to train for this fight. Tompkins believes Hominick is on another level than Roop and I’m inclined to believe that. However, these guys are very familiar with each other and I don’t see either one being able to finish because of that. Hominick by decision.

BRIAN FURBY: I don’t think Beltran has much to offer Barry, and Barry wants a big win after his disappointing loss to Cro Cop. Look for Barry to come out striking hard, and some of the fans in the expensive seats may just get a souvenir when Barry knocks Beltran’s head off his shoulders. Barry by KO in Round 1.

RICHARD MANN: In this kind of fight, Pat Barry has a big advantage. Joey Beltran is not the kind of fighter who goes for takedowns. The fight will stay on the feet, and Barry will pick Beltran apart with leg kicks. Pat Barry by TKO.

DENNY HODGE: Beltran will stand and bang, and he will pay for it. The legs of Beltran will prove to be target practice for Barry’s kicks. Barry by TKO.

JACK BRATCHER: There are few men who would want to stand and trade with Pat Barry. Unfortunately for him, Joe Beltran is one of them. Look for Barry to try to dislocate Beltran’s leg from its hip with massive low kicks. Barry wants to make a statement after the Cro Cop fight. Beltran hits hard but Barry will finish him via TKO. Hype or Die!

BRIAN FURBY: Wiman is going to be the bigger of the two, and could give Miller some problems in the wrestling area, but Miller’s jiu jitsu skills far outweigh Wiman’s. Miller started 2010 off with a bang with his submission of Dan Lauzon, and I look for him to start off 2011 the same way. Miller by submission in Round 2.

JOHN BUHL: Wiman might have a slight edge on the feet, but Miller has a tough reach to deal with for most lightweights, his boxing has really come along (he tagged Ross Pearson and hurt him on the feet before securing the submission), and on the ground, it’s all Miller. Cole by third round submission after some good back and forth action.

RICHARD MANN: This fight is truly a toss up. There is not a fighter in MMA that is more of a wild card than Matt Wiman. Sometimes he looks like he could take over the lightweight division and other times he looks dreadful. Look for Miller’s reach to five Wiman trouble. However, ultimately Wiman will be able to land the better strikes on the feet and win a decision. Wiman by decision.

DENNY HODGE: Miller will give Wiman fits with his reach, but Wiman will adjust and find a home for clean punches in the pocket, and will shine in this fight instead of stinking up the joint like he has in the past. Miller won’t have much of a chance to show off that slick submission game in this one. Wiman by decision.

JACK BRATCHER: Matt Wiman is a handsome fellow but that won’t help him one bit once Cole Miller locks him in a triangle. Both guys are coming off back to back wins and whoever wins this one will have a nice streak going. I’ts an important fight to keep the momentum going. I have to go with Miller who will probably be imagining Wiman wearing a Cowboy hat the entire fight. Miller via submission.