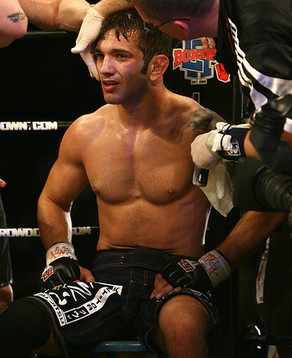 With so many fancy mixed martial arts gyms and top-of-the line facilities around these days, it’s worth remembering that some of the sport’s early competitors at times had to make due with meager resources.

John “Quick Guns” Gunderson (31-11-2) began competing professionally years before he worked his way up to the International Fight League in 2007, but he didn’t have the luxury of training full-time until that opportunity came along.

Earlier on, Gunderson worked full-time constructing and repairing bridges, traveling from town to town, working long hours and training whenever and wherever he could.

“I’d be a on a bridge for a month or two months,” Gunderson said. “I’d train at whatever local gym was there, but I’d only get to train for an hour or an hour-and-a-half.”

And if a gym wasn’t available, Gunderson would still find a way to get in a workout.

“I would even train in someone’s garage or someone’s attic,” he said. “That’s how much I love this sport. Sometimes I’d go to nearby park and do sprints, do sprawls … There were fights I went into with no sparring beforehand.”

It’s not the most orthodox way to prepare, but neither was Gunderson’s introduction to combat sports. While some make the transition to MMA from another discipline, Gunderson got into street fighting in his youth. And it wasn’t the kind of street fighting you might be thinking of, either.

“I grew up in a small town in Oregon where, literally, when we got out of school we would go out in the woods, to the park and we’d fight,” he said. “Street fighting was really big and you didn’t get in trouble for it. If we didn’t have gloves, we would just fist fight, and sometimes we would have fist fights against other schools.”

“I won a majority of them. Then a boxing gym came to town, and as soon as it came to town I started training there. Two weeks later I participated in the 1998 Oregon Golden Gloves tournament. I just fell in love with it.”

Gunderson’s love of the sport also comes through when he talks about the most memorable fights of his career.

He doesn’t point to his UFC win over Mark Holst on June 19, though I’m sure that was nice. Nor does he focus on a quick knockout or submission that sent the crowd into a frenzy and allowed him to leave the cage without taking any serious damage.

Instead, Gunderson most fondly remembers the brutal, back-and-forth battles that tested his will and pushed him to his limits, like his third round TKO win over Dave Rivas at DesertBrawl 11 in 2004.

“You could see the blood in my hair,” Gunderson said. “He’d almost put me to sleep with a rear naked choke in the second round, but all of the blood was what helped me slip out of it.”

Then there was his win in 2005 over the always unpredictable Charles “Krazy Horse” Bennett at Gladiator Challenge 40. Bennett was riding a three fight win streak at the time, including a knockout of Yoshihiro Maeda in PRIDE. As with the Rivas fight, Gunderson came out on top but took plenty of damage in the process.

After putting so much blood, sweat and tears into MMA for the better part of a decade, Gunderson’s spot in the UFC didn’t come easy.

At UFC 108 on Jan. 2, 2010, Gunderson faced Rafaello Oliveira (13-3), who dropped a decision to Nik Lentz in his Octagon debut. Gunderson had little time to prepare but little choice but to take the fight on the sport’s biggest stage.

“I was a little nervous, but the main thing was I took the fight on two weeks notice,” he said. “I was in no shape for that fight, but when they call you with that opportunity, you can’t turn it down.”

Gunderson continued, “For that fight, I had a training partner I was training with, and I told the guy to take me down as many times as he could. Almost every time, he was able to get me down.”

Eight months later, preparing for a bout with Yves Edwards, Gunderson ran the same drill with the same training partner, only with much different results.

“Even for the Yves fight, the week before that fight, I put such a beating on him in training … I really feel I could beat Rafaello Oliveira if I had a full training camp.”

After the win over Holst, Gunderson last UFC fight came against Edwards. He lost a decision and was released from the UFC soon after.

“He was just on point; he was sharp,” Gunderson said of Edwards. “My whole game plan was to push the takedown, but he hit me with a good shot in the first round and it made me mad, and I just fought with emotion. When you throw a punch and miss and put everything you have behind it, it wears you out. I also put a lot into the kimura attempt [in the first round].

“I really just survived in the third round. I think I focused so much on strength and conditioning instead of just getting back to the running. You need to have the strength, but all the ropes, different stations, plyometrics … sometimes nothing beats good old fashioned roadwork.”

With his UFC stint cut short, Gunderson will look for his second win in a row on Feb. 18 at Tachi Palace Fights 8 in Lemoore, Calif., and despite his long journey, he has plenty of fight left in him.

His opponent, Dominique Robinson, isn’t a household name, but Gunderson isn’t looking past him. With his UFC credentials, Gunderson has a lot to lose and not much to gain. Nevertheless, Robinson’s prefight trash talk caught Gunderson’s attention. In a recent press release, Robinson said he was “better than [Gunderson] at everything.”

If Robinson wants to back up his talk, he’ll need to bring his A-game.

“Tonight I sparred with Jay Hieron, Mike Pyle, Evan Dunham … and a lot of guys other people don’t know,” said Gunderson, who splits his training time with Shawn Tompkins and the Xtreme Couture camp in Las Vegas. “I’ve seen him fight. He can fight, he’s tough, but I don’t think he’s at that level.”

Gunderson also doesn’t mind fighting with the additional pressure of knowing that other up-and-comers want to beat him to build up their own status in the sport.

“I like that,” Gunderson said. “That’s what keeps me sharp. I’m not in this because I’m going to make a fortune. I make good money doing what I do, training people in Vegas. But I fight because I love it. I love the challenge of someone else training for me. I don’t care if I have a target on my back.”