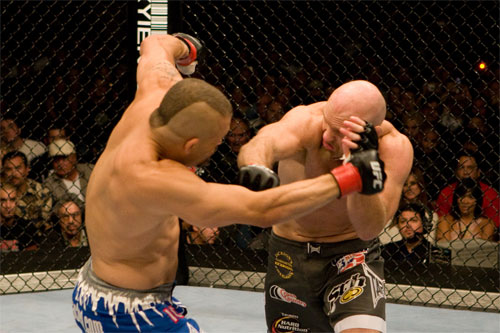 Keith Jardine will return to action on March 4. He will fight Aron Lofton at the Route 66 Casino, which is near Albuquerque, N.M.

Sherdog broke the news of the fight on Saturday. Jardine himself confirmed his participation on the event which will be announced soon.

In his last fight, Jardine picked up a much-needed win over Francisco France. Prior to that, he had lost five-straight fights. The former UFC contender received his release from the promotion after a majority-decision loss to Matt Hamill at the finale of the twelfth season of “The Ultimate Fighter.”

After failing to win the second season of the reality show, Jardine made a name for himself in the UFC with several high-profile victories. The Greg Jackson trained fighter holds wins over Forrest Griffin, Chuck Liddell, Wilson Gouveia and Brandon Vera.

Lofton will bring an 8-4 record into this fight. He lost his last fight Josh Watson. His most impressive wins have come over Brian Imes and MFC contender Dwayne Lewis.

The March 4 card is not yet named. According to the Sherdog report will be co-promoted by Casino 66 and Albuquerque-based boxing promotion company Fresquez Productions