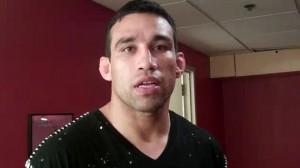 Strikeforce Heavyweight Tournament contestant Fabricio Werdum (14-4-1) says he shocked the world last year [with his submission win over Fedor] and plans to do it again in 2011.

His quarterfinal match-up will be against none other than the current Strikeforce Heavyweight Champion Alistair Overeem (34-11, 1 NC). Werdum thinks he will have an advantage over Overeem, not only because he already defeated him once in the past, but because Overeem has been focused on K-1 for much of 2010.

Werdum warns Overeem that he took one of his arms the first time they fought and plans to take his other arm this time.

Werdum defeated Overeem via kimura submission in the opening round of PRIDE’s 2006 Open-weight Grand Prix. Will he be able to repeat the performance or has Overeem improved enough since then? Overeem has gone 11-4, 1 NC and Werdum has gone 6-3 since their first meeting.