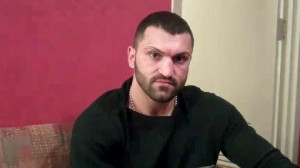 Andrei “Pitbull” Arlovski (15-8) talks about his motivation for fighting in the upcoming Strikeforce Heavyweight Tournament and admits it is not a good feeling not to be ranked among the top-10 at this point in his career.

He says he will be watching the Brett Rogers vs. Josh Barnett fight closely because he was embarrassed by the knockout loss to Rogers, but also insists he is not looking past his initial opponent.

Arlovski has a message for his upcoming potential opponents and that is to “train hard” because he does not plan on giving away “this present” of a defeat any more. He goes on to say that the tournament is a big opportunity for himself and the other fighters and he is looking forward to it.

Arlovski’s first tournament opponent will be fellow Russian Sergei Kharitonov (17-4) on Feb. 12 in East Rutherford, N.J. Fedor Emelianenko will face Antonio “Bigfoot” Silva as the main event on that same card. Kharitonov holds wins over Overeem and Werdum, both of whom are also competing in the tournament. So a win for Arlovski over Kharitonov would make a big statement.

Incidentally, Arlovski’s last three fights have been consecutive losses to Antonio Silva, Brett Rogers and Fedor Emelianenko, all of whom are competing in the tournament.