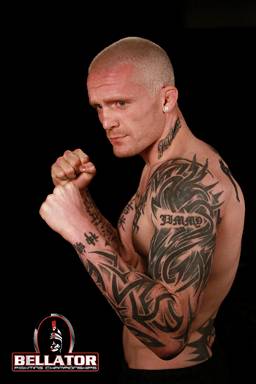 When Jim Wallhead fought Ryan Thomas at Bellator 32, it was win or go home, literally. If “Judo” Jim fell to Thomas, Wallhead vowed to trade in his 6 oz. Gloves for a 9-to-5 in order to provide for his family. However, the dangerous Brit scored an impressive unanimous decision victory and earned his spot in the upcoming Bellator Season 4 Welterweight Tournament, which airs live on MTV2 starting in March.

“Wallhead was a fighter we wanted to be part of Bellator for some time, but because of the volcanic ash in Europe, his arrival in the Bellator cage got delayed for a few months,” said Bellator Chairman and CEO Bjorn Rebney. “After his fight with Ryan Thomas, it was clear he was worth the wait. I’m excited to see if he can carry the momentum from that victory into the Bellator Season 4 Welterweight Tournament.”

Born and raised in England, Wallhead enters the tournament riding an eight fight win streak – winning 13 of his last 14 fights – and sports an impressive 21-5 record. Even with the string of victories, Wallhead expects fans to see him as an underdog in a tournament stacked with talent and familiar faces, and relishes in the role.

“I guarantee people are looking past me heading into this tournament,” said Wallhead. “I’m prepared to surprise all doubters everywhere. I will one hundred percent give every guy in this tournament a war, so bring it!”

Underestimating Wallhead certainly could prove to be a mistake, especially considering the wealth of experience the Judo black belt brings to the table. All that experience will be needed when Wallhead enters the cage against some of the best competition in the sport.

“I feel pumped getting ready to enter a tournament as stacked as this one,” Wallhead said. “There are some great fighters in the mix and its wide open for everyone to make a name for themselves. It would be a dream come true to be the last man standing out of these eight talented fighters. What an achievement.”