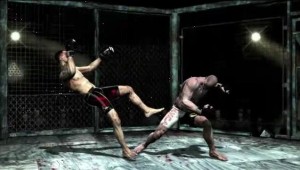 A new trailer for the upcoming Supremacy MMA video game for the XBOX 360 and PS3 has been released. The no-holds-barred style mixed martial arts video game is likely to get a Mature rating as game-play footage shows broken bones and plenty of blood (There have even been rumors you can break necks).

Unlike other MMA games on the market, Supremacy MMA is being geared for the more mature gamer. Both EA MMA and UFC Undisputed 2010 have a TEEN rating. Promos for the game read, “UNSANCTIONED, UNLICENSED, UNDERGROUND.”

Long-time MMA veteran and former UFC lightweight champion Jens Pulver will lend his likeness and back story to the game and has also been working with developers as a combat and story consultant. Supremacy MMA is being developed by 505 Games and Kung Fu Factory who created the first UFC game released on Dreamcast back in 2000.

“Supremacy MMA is as much about telling the fighter’s story as it is about delivering blistering-fast game-play that’s as brutal as the real thing, so we knew we had to get Jens for our game. His climb through the ranks of the underground into the pro spotlight and his willingness to continue to fight regardless of what title he bears exemplifies the fighter’s heart that Supremacy MMA portrays.”

Now fighting at featherweight, Pulver (22-14-1) has an upcoming fight at XFO 38 on Jan. 22 in Woodstock, Ill. against Mike Lindquist (6-19). Supremacy MMA is sponsoring the event. The targeted release date for Supremacy MMA is May 7, 2011.