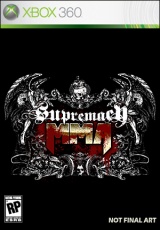 “I was there during the early days of MMA and came up when things were just out of control crazy, so stories like mine are perfect for a game that’s taking things back old school like Supremacy MMA,” said Pulver. “The truth is there are thousands of fighters out there struggling for a shot, whether they fight underground, amateur or at the highest levels of the sport. They’re doing it, and Supremacy MMA tells those kinds of stories, so I’m glad that this is the game I get to be a part of.”

Pulver will lend his likeness and backstory to the game, as well as serve as a combat and story consultant. Jens Pulver will fight January 22nd at XFO 38 in Chicago, IL. The event will be sponsored by Supremacy MMA.

“Supremacy MMA is as much about telling the fighter’s story as it is about delivering blistering-fast gameplay that’s as brutal as the real thing, so we knew we had to get Jens for our game,” said Ian Howe, president of 505 Games. “His climb through the ranks of the underground into the pro spotlight and his willingness to continue to fight regardless of what title he bears exemplifies the fighter’s heart that Supremacy MMA portrays.”

“After spending years working on MMA and fighting titles ranging from the original UFC game for Dreamcast to UFC Undisputed 2009, Supremacy MMA is definitely the game the team has always wanted to make and Kung Fu Factory is beyond excited to have Jens be a part of it,” said Ricci Rukavina, co-founder and executive producer, Kung Fu Factory. “Because we’ve shaped our own underground world, we’re able to have total creative freedom. We’re excited to go beyond the television screen to tell stories like Jens – real fighters, who have made a difference in the sport, peoples lives and beyond.

An outspoken fighter and avid gamer, Pulver single-handedly put the lightweight division on the map for UFC, fighting above his weight category for years before the UFC all but created the lightweight class for him. He went on to dominate at his true fighting weight, winning three UFC championship titles.

Supremacy MMA brings the brutality of unsanctioned, amateur and unlicensed MMA fighting to the Xbox 360 and PlayStation 3 systems, favoring fast-and-furious gameplay and underground aesthetics over official branding and television-style presentation. The game raises the bar in the MMA space by bringing an unprecedented level of fast, fluid combat, intuitive controls and true-to-the-sport brutality, telling the story of up-and-coming fighters in their quest for supremacy.

About 505 Games
Based in Los Angeles, CA, 505 Games (U.S.) is the North American division of 505 Games, a global videogame publisher. The U.S. operations launched in May, 2008 to bring quality interactive entertainment to North America on all game platforms including Microsoft Xbox 360, PlayStation 2 system, PlayStation 3 system, PSP, Nintendo Wii and DS, as well as PC, online, and mobile. The company’s management team hails from the leaders in global entertainment including major motion picture studios, videogame publishers and leading game development studios. With the company’s deep experience and proven success in interactive entertainment worldwide, 505 Games is looking to drive the industry forward with innovative game experiences that integrate next generation game play, immersive stories and integrated brands that can take the business to a new level. The company offers a broad selection of videogame titles in all genres for players of all ages.
For more information on 505 Games and its products please visit www.505games.com

About Kung Fu Factory
An independent videogame developer driven to bring its seasoned perspective of combat and violence to the interactive entertainment world, the Kung Fu Factory team consists of leading game and technology experts best known for their collective work on titles like the original UFC (Dreamcast), The Warriors, Mortal Kombat: Armageddon, Scarface, True Crime and most recently UFC Undisputed 2009. Founded by industry veterans and childhood friends Daryl Pitts and Ricci Rukavina, KFF’s primaries have worked in the industry for nearly two decades.