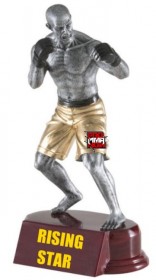 Our Pro MMA Now 2010 Awards works much like our ProMMAnow.com staff picks. Each staff member will select the winner they believe deserves the award and will explain their decision. That is it. Nothing fancy.

The Rising Star Award goes to that fighter who’s star began to shine in 2010. Most fans probably had not heard too much about this fighter prior to 2010, but they won fights and forced the MMA world to take notice. These are the fighters who not only have great potential and talent, but have begun to put it all together and are headed toward greatness.

John Buhl: Edson Barboza – By all accounts, and even just looking at his UFC 123 debut win, Barboza is a physical freak of nature. He might quickly become one of the most feared strikers in the lightweight division, though we’ll know more after his UFC 128 bout against Anthony Njokuani.

Richard Mann: Gunnar Nelson – Nelson took a break from MMA in 2009. He picked up gold medals at the IBJJF Pan American Championship in gi and no-gi. He then had an impressive showing at the 2009 ADCC Submission Wrestling World Championships. In 2010, he returned to his MMA roots and went 3-0. Look for him to make another step forward in 2011.

Denny Hodge: Ovince Saint Preux – 6-0 in 2010. As the competition has gotten better, so has Saint Preux. He destroyed Benji Radach in December only a couple weeks after defeating Antwain Britt. Saint Preux has said he wants everybody to know his name, and in 2011 many MMA fans will know who Ovince is.

Jack Bratcher: Ovince Saint Preux – For me, no other MMA fighter impressed me the way Ovince Saint Preux did in 2010. When you consider that prior to 2010, Saint Preux’s record was 3-4 and he was practically unknown by the average MMA fan, what he accomplished in a matter of twelve months is remarkable. He won six fights in 2010 over such fighters as Jason Day, Antwain Britt and Benji Radach. He made his Strikeforce debut in April 2010, and by the end of the year had won three fights in the promotion. His fights with Britt and Radach took place just two weeks apart. He’s not a superstar yet, but he is well on his way.