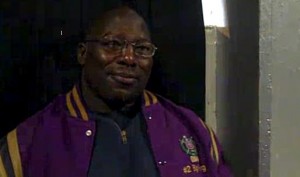 ProMMAnow.com (www.prommanow.com) got the chance to catch up with Dr. Rhadi Ferguson following his second round submission win in his Strikeforce debut Friday night at “Strikeforce Challengers 13” in Nashville, Tenn.

Dr. Ferguson (3-0) took on an enormous John Richard, a South Carolina fighter and Division II wrestler who normally fights at heavyweight and came into the bout on short notice carrying a 3-1 record.

Round one saw Richard get a takedown early on and take Ferguson’s back. Ferguson was able to turn it around though and ended with top position and laid on the ground and pound for the remainder of the round.

In round two, Ferguson sustained a kick to the groin that the referee missed and this caused him to trip to the ground and Richard pounced. They scrambled and Ferguson first went for a knee-bar, then transitioned to a heel hook where he forced Richard to tap out at the 2:00 mark.

It was a competitive and exciting bout that saw both fighters in advantageous positions. In the end though, the 2004 Olympian’s grappling experience and BJJ black belt made the difference.