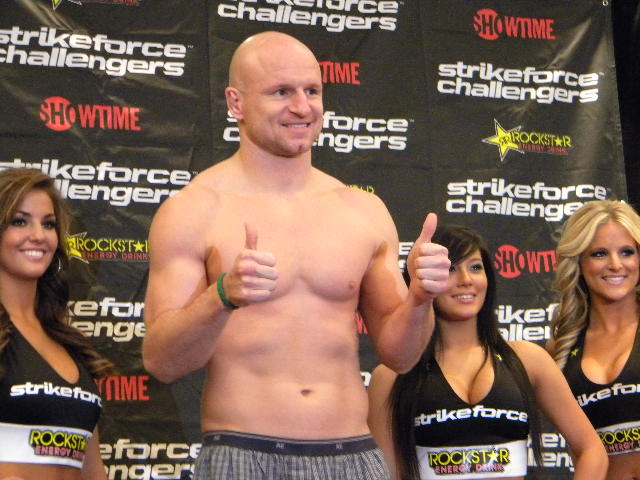 Sometimes MMA means way more than wins and losses. Every fighter that steps into the cage knows the potential for serious injury is always there, and that it can happen in the blink of an eye.

Dustin West knows this firsthand. After landing a staggering right hand against Andy Uhrich in his Strikeforce debut at the Strikeforce: Nashville event last April, West knew immediately something was wrong.

What he didn’t know at the time was just how severely his hand was damaged. As a spectator it was easy to see West was having trouble defending when Uhrich locked up a submission attempt, and in within a few moments, the fight was over.

If you ask West what happened, he will simply tell you that he lost and got injured in the process. He refuses to blame the loss on the injury.

“Not only did I walk away with a loss, I walked away with a pretty serious injury,” said West.

It turns out that the “serious injury” was so severe that doctors told West that he may never fight again.

“I was out for six months and I wasn’t real sure if I was going to be able to come back,” West told ProMMAnow.com. “So the fact that I’m even fighting at all is great.”

The hand was broken in several places, and after a long and painful rehab, and a recent successful training camp, West is once again ready for another opportunity to fight for Strikeforce.

“I’m happy to be getting another chance to fight on that Strikeforce canvas,” said West. “The injury for sure changed my outlook on fighting. I’m way more relaxed now. I know that this fighting thing isn’t going to last forever and it can be taken away from you quick. I’m just trying to enjoy the process, relationships, and experiences more, and I’m really feeling good about where my head is at right now.”

With a last minute opponent change, West had little time to prepare for his new opponent, Daniel Schmitt, but the change means little to West.

“It really doesn’t matter,” said West. “I’ve got to fight my fight and I have to respect him, because we all know that anything can happen in that cage. The fact that he took the fight on such short notice and without a lot of questions, lets me know that the dude has heart and I respect the hell out of him for that.”

What the future holds for West remains to be seen, but a good performance this Friday at Strikeforce Challengers 13 may present more opportunities within the organization, and the former Marine has somebody specific he would love to fight in the near future.

“I know most people would say they want to fight a major title holder or something like that, but honestly, for some reason, I have always wanted to fight Scott Smith,” West said.

“There has just always been something about him that has made me want to get in a cage and go punch for punch with him. And I mean that with all due respect. I just know how he fights and how I like to fight, so, for me, I would welcome that kind of challenge (laughing).”

“So, Rich Chou…if you read this, as soon as Scott is ready to come back…if you’re looking for a ‘tune up’ fight for him, call my manager!”

Before any future fights under the Strikeforce banner goes down, West will set his sights overseas for his next challenge, fighting in Ireland.

“As soon as this fight is over, it’s right back to work,” said West. “I’m headed over there to fight one of their local guys, so it should be a good time. I’m pretty excited about the trip and to get to fight in front of some wild MMA fans.”

As always I want to thank everyone that makes fighting possible for me, my local fans who buy all these tickets and make all that damn noise!  I have to  thank Nashville MMA and my teammates for always getting me ready to fight, and my manager that handles all the bullsh*t so I don’t have to. I have had a lot of different sponsors from fight to fight, but Dan Crowson with Headshot has been around and with me since the beginning so I need to give him a big thank you.