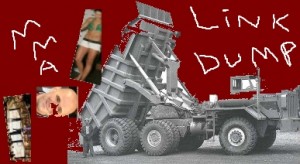 Still hungover from Christmas? Do you wish it was Christmas every day of the year and Monday would never come? Here’s a few things to get you through the day and help make the weekend last as long as possible…

FEATURE: Pride and pressure of being part of fighting dynasty – The Taipei Times has a nice feature on Igor Gracie. He talks about going to law school and business school but in the back of his mind he knew he just wanted to teach BJJ and fight. He also talks about the possibility of seeing BJJ in the Olympics and the evolution of jiu-jitsu.

‘Judo Knight’ Putin shows off martial arts skills – In a recent video with Russia Today, Russian Prime Minister Vladimir Putin, a black belt in Judo, shows off some of his moves.

Joe Rogan podcast #65 – Joey “Coco” Diaz a.k.a. “Joey Karate” joined Redban and Rogan on the latest podcast. If you want to live vicariously through three aging stoners, you can’t do any better.

12 unfiltered minutes from Pat Barry – Listen to Pat Barry talk about everything from the after-life to his fear of flying and everything in between. Barry also says he fully plans to get knocked out sooner or later and “knows it’s coming.”

Ricco Rodriguez: Will the Road to Redemption lead to the UFC? – In this interview with MMA Weekly, former UFC heavyweight champion Ricco Rodriguez, who is on a ten fight win streak, talks of his hope to return to the UFC. He talks of potential bouts with Randy Couture, Frank Mir and hopefully a rematch with Antonio Rodrigo Nogueira.

Lyoto: “Once you lose, nobody wants to know about you anymore” – In this interview with Tatame, former UFC light heavyweight champ Lyoto Machida talks about the year that was 2010 for him, losing his belt as well as a somewhat controversial decision to “Rampage” Jackson.

Cole Miller interview – Cole Miller talks about wanting to rip Donald “Cowboy” Cerrone’s arm off, says he would fight him even outside the Octagon, talks about his upcoming fight with Matt Wiman and also says he’s considering dropping to 145-pounds.

Ken Pavia vs. UFC – MMA super agent Ken Pavia talks about his lawsuit with the UFC, some of his clients’ upcoming bouts, including Phil Baroni, who may be fighting for his job at UFC 125 on Jan. 1 when he takes on Brad Tavares.