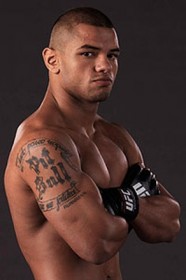 Welterweights Thiago Alves and Rick Story will likely square off on May 28 in Las Vegas, according to MMAWeekly.com.

Once the UFC’s top 170-pound contender, Alves (18-7) came up short against champion Georges St. Pierre. However, he followed that up with a disappointing performance against Jon Fitch, missing weight prior to the fight and losing a unanimous decision. But Alves bounced back at UFC 124, making weight just fine and punishing fellow striker John Howard for three rounds.

Story (12-3) is also coming off of his own impressive outing, out-striking Johny Hendricks at the TUF 12 Finale and also managed to fend off Hendricks’ formidable wrestling. Story is riding a five-fight UFC win streak following his debut loss to John Hathaway.