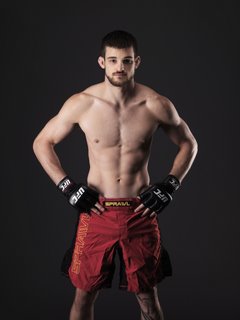 Dustin Hazelett had a UFC record of 5-2 at one point while campaigning at welterweight, but consecutive losses to Paul Daley and Rick Story prompted him to try his luck at lightweight.

In his 155-pound debut, Hazelett was submitted by Marck Bocek at UFC 124. Today, MMAWeekly.com reported that Hazelett has been released by the promotion.

A black belt under Jorge Gurgel, Hazelett and Bocek went to the ground early in their fight, with Hazelett trying to use his long legs to lock something up with the rubber guard. But Bocek passed his guard into mount and eventually locked on a tight triangle choke that forced the tap.

UPDATE (5:34 p.m. CT): ProMMAnow.com (www.prommanow.com) has confirmed with sources close to the situation that Hazelett has indeed been released.