“MMA is on Fire!” – as performed by Bruce Buffer *VIDEO* 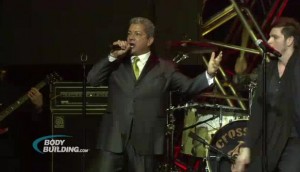 This year’s World MMA Awards featured plenty of sketches with performances by some of MMA’s most notable personalities. However, none of them seem to be quite as addicting as this rendition of “MMA is on Fire!” by the voice of the Octagon, our main man Bruce Buffer. If the tune sounds familiar, that’s because it is a remake of the Billy Joel classic, “We Didn’t Start the Fire.”

Be warned, there’s a fairly good chance you will be singing this song throughout the rest of the day, and probably tomorrow too. If you have a fear of being seen acting completely foolish, even by yourself, it would be best just to avoid this video altogether.

Buffer could possibly have a future as a Vegas lounge act just performing this one song if this whole UFC thing doesn’t work out. Buffer is probably too busy for that, with his card playing and radio show and all that. So maybe since he has to be at the fights anyway, he could sing this live between every fight at every UFC event, forever. Make it happen Dana!