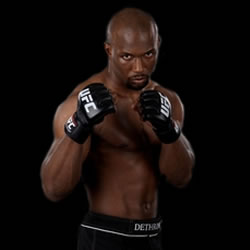 After bouncing back from losing his UFC debut, welterweight Daniel Roberts (11-1) is looking to build on his current two-fight win streak at the expense of Greg Soto (8-1) on Jan. 1 at UFC 125 in Las Vegas.

The first round knockout loss to John Howard on March 21 was the first setback of Roberts’ pro career.

“In that fight, I just got caught,” Roberts said. “Sometimes it happens in this sport.”

He rebounded with a split decision win over Forrest Petz. While crediting Petz for his toughness, Roberts lamented that he didn’t find a way to get the finish.

However, Roberts’ skills were definitely on display against Mike Guymon at UFC 121. He nailed Guymon with a stinging leg kick earlier on. When Guymon tried to close the distance to get into the clinch, Roberts locked on an anaconda choke – from the standing position – and rolled Guymon to the mat to force the tap. It earned Roberts the “Submission of the Night” bonus.

Roberts will carry that momentum into the fight with Soto. It’ll be an interesting clash between too up-and-comers with very good grappling skills.

But Roberts, who earned All America honors as a collegiate wrestler and has compiled some pretty impressive submission grappling achievements, is confident he’ll find a way to win.

“He’ll probably try grappling with me at some point and that’s fine with me,” Roberts said. “It doesn’t matter what he does. I’m feeling very confident going into this fight.”

A good deal of that confidence likely comes from his recent time out in San Francisco, Calif., training with Strikeforce lightweight champion Gilbert Melendez and top UFC welterweight contender Jake Shields. Roberts also occasionally gets to train with a couple of other prominent Cesar Gracie team members: Nick and Nate Diaz.

Not a bad group to work with. And for good measure, he’s also spent time working at the Fairtex gym in San Francisco.

“My grappling was good before, but it’s getting even better,” Roberts said. “My Muay Thai is getting a lot better also.”