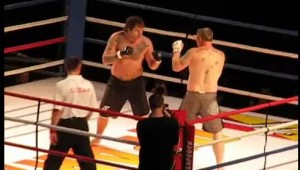 Graham stopped Emelianenko with leg kicks at 2:59 of round two in an MMA bout under modified rules that called for the fight to be stood up after 30 seconds if it went to the ground.

Although Graham is a legend in the kickboxing world, having competed professionally for over a decade, and with 30 of his 55 wins coming by knockout, he has only been fighting in MMA since 2008. The win over Emelianenko brought his MMA record up to 4-5. Graham also holds a pro boxing record of 6-3-1.