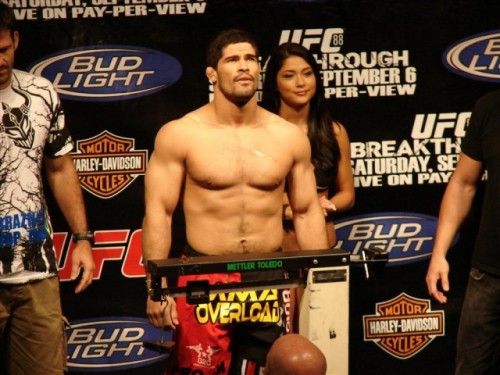 Former teammates Rousimar Palhares and Alexandre Ferreira are set to face off at UFC Live 3. According to various reports, the card will take place on March 3 in Louisville, Ky.

Brazilian MMA news source Tatame broke the news of the fight. The card has not been officially announced by the promotion, but several media outlets have reported that the promotion is headed towards Kentucky.

Palhares and Ferreira trained together while they were members of Brazilian Top Team. Ferreira, known as “Cacareco” will drop down the middleweight division after coming up short in his promotional debut. Former IFL champion Vladimir Matyushenko stopped Ferreira in the first round. Prior to that, the grappler had won seven-straight fights. Now training out of Chute Boxe, he holds victories over Lew Polley and Fabio Maldonado.

At UFC Fight Night 22, Palhares had his three-fighting winning streak snapped by Nate Marquardt. The bout was not without controversy. During the fight, Palhares began to complain to the referee about Marquardt possibly being greased. Marquardt took advantage of the situation and unleashed a striking flurry that finished the fight.

Multiple reports have claimed that welterweights Martin Kampmann and Diego Sanchez will also fight on the card.