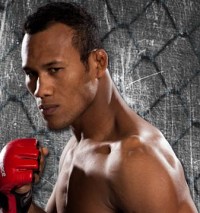 Jacare won the title with a unanimous decision win on Aug. 21 over Tim Kennedy. In his two other Strikeforce appearances, Jacare submitted Matt Lindland and picked up a decision win over Joey Villasenor. A top-notch Brazilian Jiu Jitsu combatant with ADCC and BJJ World Championship titles to his credit, Jacare has also showed a solid striking game of late, even managing to defeat Kennedy without spending much time on the mat.

His opponent, Lawler, is only 2-2 in Strikeforce, but scored a sensational KO win over Lindland on Dec. 4. And before entering Strikeforce, Lawler had won five fights in a row.